Gray Lady Down: What the Decline and Fall of the New York Times Means for America 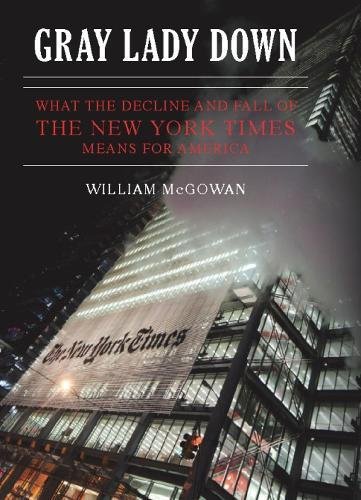 It is difficult to sort out how much of Gray Lady Down is personal or an objective assessment of the New York Times by William McGowan.

One thing is sure: If you love to hate the New York Times, you will love this book.

Reading McGowan’s long treatise of the demise of the great paper became tedious quickly. In just two chapters, I knew exactly what was coming next: more of the same.

In order to manage this much material, however, McGowan spared nothing in doing his research. His attention to detail is stellar. He dives deep into the background of hundreds of news stories to highlight exactly what the issues are, who has covered the story, how, when and where the Times fell short and in what way they made bad decisions.

Paragraph after paragraph and chapter after chapter McGowan scolds the Times for either their lack of coverage or how they managed a particular story.

McGowan expresses his regret was that no one was qualified to take the reins from A. M. (Abe) Rosenthal when he retired in 1986 or the publisher, Arthur O. “Punch” Sulzberger when he turned publishing duties over to his son, Arthur Sulzberger Jr., in 1992.

A drastic change in policy toward gays came when Rosenthal’s successor, Max Frankel, took over. Rosenthal had banned the word “Gay” which he had considered overtly political.

According to Michelangelo Signorile, a gay columnist, the Times newsroom was extremely inhospitable to gay men and women.

“Those who were suspected of being gay often suffered in their careers, sent to unimportant dead-end bureaus and desks or even recalled from foreign postings if word their sexual orientation leaked out,” McGowan wrote.

“This ban held back the social movement and Rosenthal’s homophobia also left gays immensely frightened and frustrated,” according to McGowan’s account of Signorile’s assessment.

Frankel is quoted as saying, “I knew they’d (Gays) had a hard time, and I knew they weren’t comfortable identifying themselves as gay. But I never dreamed that so many homosexuals were hiding in newsroom closets, awaiting the trumpet call.”

Another significant change McGowan recounts is the changing of the guard when Arthur Sr. left the paper in the hands of his son.

McGowan comments in his book that Punch Sulzberger said that family members would have to work harder than most people if they wanted to get to the top.” However, McGowan says in his book that everyone knew this was not true.

Yet, Sulzberger’s resume is quite impressive for the son of the publisher “languishing” his way to the top: He began his newspaper career with the Raleigh (NC) Times in 1974 and worked his way up, step by step, at the Times printing department and distribution facilities in Edison, NJ, and to the Times assistant metro editor. He also found time to get a graduate degree from the Harvard Business School’s Program for Management Development.

Under his tenure, the Times has earned 39 Pulitzer Prizes.

McGowan’s criticism of the Times has some validity in specific cases. He notes that in May 2007, the PEW Research Center released an important study on the Muslim immigrant population. The study was more encompassing than McGowan states in his book where he focuses only on the negatives such as the under-30 Muslim population being more religiously observant and more accepting of Islamic extremism. There is another side to the report he doesn’t cover which is that the PEW study also found Muslim Americans to be largely assimilated, happy with their lives, and moderate with respect to many of the issues that have divided Muslims and Westerners around the world.

Yet, the New York Times did not report this important study whereas it was reported in almost every other newspaper and media outlet across the country.

The PEW study is but one criticism McGowan points out in his extensive ridicule of the New York Times. In one chapter alone, McGowan takes the Times to task on 38 different counts for mismanaging the editorial decisions of the paper.

Yet, the author goes too far in criticizing the New York Times for its reporting on 9/11. His evaluation that the Times minimized the role that jihadism played and was handled in a “journalistically clumsy way,” is faulty at best.

He goes on to say, or imply, that in the immediate aftermath of 9/11, the Times was criticizing national security and intelligence bureaucracies with respect to the reports related to the attack. When in fact, it was the government officials themselves who were “reporting” the inadequacies of our systems and the Times was quoting their remarks.

One example is a Sept. 12, 2001 Times story in which Senator Richard Shelby, R. (Alabama) and vice chair of the Senate Intelligence Committee said, “the government had received some ‘general warnings’ in the recent past, but said there were ‘no specific warnings,’ of an assault against the United States. In the same story, Shelby said, “the failure to penetrate the plot in advance constitutes ‘an intelligence failure.’“ He went on to say that if there were no hints of this coming attack in intelligence reporting, “then we got caught flat-footed.”

The author preaches that newspapers must remain a “common narrative and national forum free of cant and agnostic toward fact.” Yet McGowan was anything but. His plea for unbiased reporting is disingenuous as he decries the state of political polarization that is plaguing our nation. He does a disservice to the cause by figuratively shaking a finger at the New York Times, labeling the paper as “intellectually dishonest.”
It is apparent writing this exposition was necessary for McGowan; however I can’t say it was enriching in any way and have to wonder why it is so important to the author.