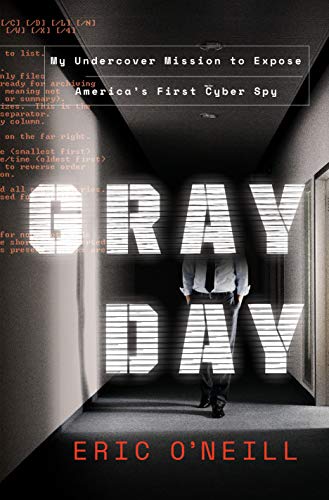 “A must read, Gray Day is a well told tale that allows us to spy on the spies, if you will, to see from the inside what it takes to defeat counterintelligence attempts to compromise American security at a time when it’s most vulnerable.”

FBI agent Robert Hanssen was one of the worst counterintelligence spies ever to penetrate American intelligence, spending 22 years feeding classified information to the Russians. He passed on material covering the American nuclear program and a U.S. assessment of Russia’s efforts to compromise it. He revealed America’s defensive strategy in the event of a nuclear attack, including the continuity-of-government plan, which detailed where the president, vice president, and cabinet were to be sent during an attack.

He burned covers and put countless operatives at risk. He revealed the identities of Russians working for U.S. intelligence in Moscow. He even told them about the existence of a tunnel under their embassy in Washington D.C. that was being used by the FBI as a listening post. Not to mention countless pages of classified documents revealing American protocols, tactics, and methods.

The story of how Hanssen was finally caught after two decades of eluding detection is told by Eric O’Neill in Gray Day: My Undercover Mission to Expose America’s First Cyber Spy. It’s a remarkably chilling story of how the American intelligence community, and the FBI in particular, lagged far behind in the counterintelligence war. “It was like,” O’Neill explains, “the United States was coaching a Super Bowl team against a rival who knew each play before the offense set up at the line.”

O’Neill brings us inside the world of the FBI in 2001 when they finally begin the last leg of their hunt for the spy known as Gray Day. With Hanssen as their suspect, young Eric O’Neill is inserted into a makeshift unit called the Information Assurance Section, set up to trap Hanssen into revealing evidence that would finally allow investigators to bring him to justice.

O’Neill is not a special agent with the FBI but what they call a “ghost,” a well-trained surveillance expert specializing in undercover work. As Hanssen’s only employee, he endures the man’s brow-beating and contempt as a “know-nothing clerk” while searching for evidence and learning the ins and outs of Hanssen’s highly successful tradecraft.

One of the more important lessons O’Neill learns from his abusive, enigmatic boss is what the suspect himself calls Hanssen’s Law: “the spy is always in the worst possible place.” Is Hanssen taunting O’Neill by drilling this aphorism into his skull? O’Neill explains the concept of a trusted insider, someone who, “by virtue of their position, has authorized access to critical systems . . .  [and] uses that access to steal, disrupt, or destroy.” For years, Hanssen has operated as a trusted insider, and now O’Neill is trying to pull off the same trick under Hanssen’s very nose.

As he tells his story, O’Neill reveals the toll this operation took on his new marriage and on his part-time studies as a law student. His narrative keeps the reader in suspense, not only with the constant danger of being caught by Hanssen but also with the stress and tension percolating between O’Neill and his wife.

The story reads like fiction, with a solid plot and hair-raising scenes, but it’s based on subsequently declassified information, O’Neill’s notes and journals, and his extensive memories of events as they unfolded. It concludes with an examination of recent Russian hacking operations, including the theft of John Podesta’s e-mails and the compromising of numerous computers belonging to members of the Democratic Congressional Campaign Committee during the 2016 election campaign.

Gray Day is a book you’ll stay up all night with, apprehensive that our intrepid young hero will be caught by the jaded, experienced spy or that his marriage will fall apart before he makes it through to the end.

A must read, Gray Day is a well told tale that allows us to spy on the spies, if you will, to see from the inside what it takes to defeat counterintelligence attempts to compromise American security at a time when it’s most vulnerable.