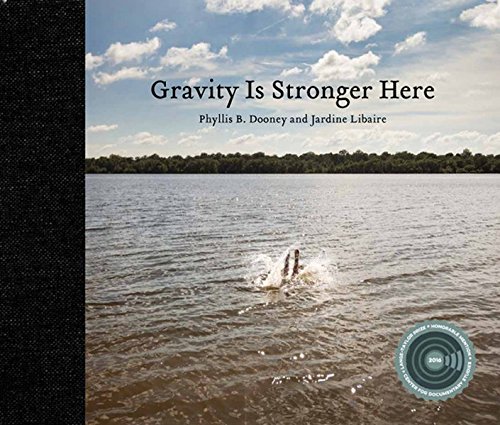 “Gravity Is Stronger Here by Phyllis B. Dooney and Jardine Libaire acts both as a time capsule and a group portrait. Capturing images from an eccentric rural south, the book gives voice to the paranoia, rage, and love in its people.”

Greenville, Mississippi, is the setting for the events and personalities profiled in Gravity Is Stronger Here, by Phyllis B. Dooney and Jardine Libaire. Dooney’s photographs illuminate the rural landscape while Ms. Libaire’s poems accompany the visuals. Published in a handsome hardcover edition by German publisher Kehrer Verlag, Gravity offers a vision of the rural south that defies expectations.

Gravity traces the goings on of Halea Brown, along with her family and friends. As Dooney explains in the introduction, “Halea was a petite eighteen-year-old woman dressed like Justin Bieber who called herself ‘$uperdike’ and was full of conviction.” (Emphasis Dooney’s.) Dooney self-identifies as a Yankee, “the child of Connecticut,” although she calls “the New York City suburbs . . . my motherland countryside” populated by “stoic, college-degreed American white folks, theoretically my folks.” What Dooney received upon entering Greenville was culture shock, but not necessarily the expected culture shock one associates with the stereotypes of the rural south.

Dooney and Libaire use words and photographs as a corrective to this rampant stereotyping. Dooney explains how “[T]o my delight, the folks in the Delta embrace eccentricity and individuality in a far, far more comprehensive way than we do up North. Ideological conservatism abounds, but socially I see the love of story, the love of character and of peculiarity, as the governing principles in many daily interpersonal relations.”

One site of these relations is Spectators, a karaoke bar where Halea performs. The accepting crowd has a varied racial and socioeconomic make-up, rich and poor, black and white. The camera captures bedrooms and landscapes, bodies and scars.

scars from a boat propeller, long ago,

dragged its claw across her face.

She lights another cigarette.

Is this a tribute to Halea’s girlfriend, Dakota, or is Libaire converting human pain into an aesthetic object? Or is that alleged binary opposition a contrived notion?

The poems articulate the photographs devoid of caption and commentary. Titles like “Unemployment at a High,” “Call of Duty®,” and “New World Order Sonnet” shine a light on a world of harsh realities vainly attempting to find answers to their situation. As the last poem says,

“I got this DVD at a gun show—watch and you’ll believe it.

Alex Jones and Glenn Beck are prophets of the change.”

The poem “Commerce” mixes beautiful imagery with a poisonous menace:

But outside the banks: freshly planted pansies, clipped hedges, and emerald lawns.

Somebody’s still got money in this town.”

These statements reflect what happens when entire populations remain forgotten and denigrated. At the same time, the faces in these photographs show individuals following their own eccentric stars. Expressions of stubbornness and vulnerability are seen, whether in tender bedroom moments or in macho posturing.

For example, a photograph of a kitten will be seen and a few pages later a group of men will be using compound bows to shoot targets. A wonderful kind of untamed wildness inhabits these images. It is a wildness that refuses domestication or obedience to soul-numbing suburban homogeneity. The town residents embracing Halea’s queerness comes from this cultural wildness and the fact that poverty can be a great equalizer.

Gravity Is Stronger Here by Phyllis B. Dooney and Jardine Libaire acts both as a time capsule and a group portrait. Capturing images from an eccentric rural south, the book gives voice to the paranoia, rage, and love in its people. Routinely marginalized and stereotyped, Halea, her friends, and her family buck these stereotypes. Dooney and Libraire show a rural south richer and more varied than that manufactured by pollsters and marketing teams. Keep Greenville, Mississippi, strange.