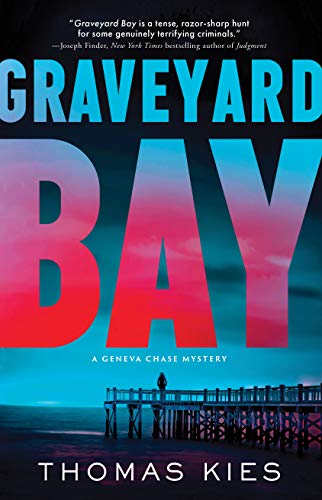 “when it comes to gritty real life plots, believable characters, and on-point descriptions of both people and place Thomas Keis can't be beat.”

Readers will thoroughly enjoy this steadfast mystery featuring investigative reporter Geneva Chase, book three in the series. It's set on the Connecticut side of Long Island Sound in a fictional marina called Groward Bay, nicknamed Graveyard Bay because dismembered arms, legs, and torsos are often found there.

It's winter time, cold and dark. The water is black, the air frigid. Blustery winds sting cheeks and gloveless hands with icy crystals and frozen grime. Dressed for the weather, a scarf covering half her face, Geneva Chase arrives to report on two nude bodies found chained to the prongs of a mammoth fork lift used to heft water craft into storage. It's a horrible way to die. Read on. The author tells you what happens to a human body submerged in near freezing water.

Readers who have not spent time on the East or West Coasts may not be familiar with the gigantic marinas and storage docks along our continental shoreline nor the equipment used to store ocean going vessels for the winter.

Here's what Geneva and law enforcement officials see when they arrive at the crime scene:

"I could see through a yawning three story open doorway into the cavernous metal building where easily two hundred boats were warehoused on shelves, bows against the wall, sterns pointed toward the middle of the room, stacked one on top of another, five deep.

"I could easily see the larger boats. They were parked outside, winterized—drained of fluids, shrink-wrapped in white plastic, held off the ground by huge wooden blocks under their hulls, braced against the wind on multi-legged, metal jack stands. There must have been at least three hundred vessels. . . . lined up in neat rows leaving just enough room for a car or truck to drive along . . . "

And here's the massive machine that does the heaving lifting:

"It can reach down eleven feet under the water and haul up a forty-thousand pound boat, lift it up, carry it into the dry-stack over there, then hoist it thirty-seven feet into the air. The two forks are forty-seven feet long. Machine weighs a hundred and thirty-four thousand pounds. . . ."

It's called a Wiggins Marina bull, and there are videos of it in operation on the Internet.

Early on it's revealed that the male corpse belongs to Judge Niles Preston, a known womanizer who is suspected of taking payoffs for dropping cases. The female corpse is unidentified and incorrectly thought to be one of his paramours.

The primary suspect is Merlin Finn, a man with Russian Mafia connections. Judge Preston had sentenced him to two consecutive life sentences without hope of parole, but Finn has escaped from prison, current whereabouts unknown.

In order to find out more about the elusive Merlin Finn for her news article, Geneva pays a visit to his wife. While there, she is shown the S & M torture chamber Finn keeps in the basement of their home, a place Geneva is later held captive.

This story, like those in previous Geneva Chase books, is pretty evenly divided between the mystery at hand and Geneva's deeply flawed personal life.

Geneva is a heavily layered character, and some readers might find her hard to like. She's been called a functioning alcoholic, but she comes across as more than that, much more. It seems every other thought coming through her mind is related to drinking or her failed efforts to overcome it.

Because of her drinking, she has a history of making bad choices, including an affair with a married man, and several failed marriages of her own. In this book, the claws of her addiction are still deeply embedded.

Even so, there is much to admire in someone, fictional or real, who takes in a child not their own to care for and raise. Geneva is guardian to a teenager whose parents are dead. Putting aside whether or not she is qualified to do this because of her drinking, it takes someone with a loving spirit and a huge heart to take it on.

The newspaper Geneva currently works for is in the process of being sold. The new owners take away her editor salary and demote her back to street reporter. A new editor is given her job, her salary, and her office.

Geneva's not happy with this new arrangement—who would be?—and as a consequence, she continually butts heads at work. But frankly, Geneva is lucky to be employed at all. She's already been fired from the three best jobs she's ever had because her drinking overshadowed her journalistic ability and integrity.

Other writers will envy this author's skill in describing scene settings and the major and minor characters who walk through his pages. That takes talent especially in a book with a lot of characters like this one. Every character is a distinct entity, there are no look-alikes. His descriptions are vivid and precise. It brings one to wonder if he conjures up all these people from inside his brain, or does he, like other authors, sit in Starbucks and put to paper the people around him? In any case, when it comes to gritty real-life plots, believable characters, and on-point descriptions of people and place Thomas Keis can't be beat.