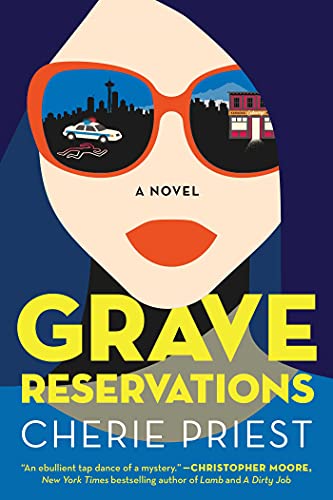 “For mystery readers looking for an entertaining read with a character who is off the beaten path, Grave Reservations will be a pleasing entry.”

Priest’s new book is a pleasant romp through the paranormal. Leda Foley works as a travel agent, but she has a special gift. She can sense things. When she senses that a flight she booked for a Seattle detective will crash, she switches him to a later flight on a different route.

Grady Merritt was running so late he might have missed the flight anyway, but he’s furious that the travel agent made a change behind his back. When he calls to complain, he orders her to switch him back to the original flight. Since she doesn’t, he soon witnesses his original plane crash on the runway. He watches in amazement “as sooty ex-passengers careened down the emergency chute.” He knows he might well have been among them.

Grady goes to Leda’s office, but he doesn’t want more travel arrangements. He wants her to help with a case he hasn’t been able to solve. He reasons that if she can sense things, she’ll be able to visit the scene of the crime and come up with at least one little hint that will lead him back through clues he couldn’t put together before. Thus is born a strange new partnership of police detective and psychic wonder.

Leda is naturally worried about working with a police officer. She resists him as long as possible, for one reason because she can’t always count on her abilities. She’s not convinced she can necessarily help anyone. But she caves into Grady’s request for help, partly because she’s intrigued and flattered, but also because she too has an unsolved case in her past—the death of her boyfriend. She hopes that Grady can help her as much as she can help him.

Priest has written many books in other genres such as horror and Southern Gothic. This series launch takes us in a new direction. As a young protagonist, Leda easily hooks us in. Although she has a special talent, she’s not comfortable with it or with herself, so we can easily relate to her. She has a special dilemma that no one can help her with.

When Grady accuses her of having “psychic vibes,” she’s almost grateful to have to own up: “It’s not something I tell the whole world about, and not very precise or reliable, but I’ve learned the hard way over the years that I can’t just ignore it when I feel it. When I ignore my feelings, bad things happen.”

We want to ride along with Leda to see how her feelings play out because we can imagine similar moments in our own lives where we took a different street, changed around an appointment, picked up the phone and called a friend even though we didn’t have a concrete reason for doing so. Leda is the sum of our own superstitions played out in a concrete way.

Leda is a well-rounded character. She realizes that her abilities are inexact, so small steps of progress are useful: “It was all progress; even when she hit a brick wall, at least she learned where the wall was. Maybe, with time, she could take a sledgehammer to that wall. Or pick at it with a chisel and a hammer, for slower and steadier progress.” Her constant doubts remind Grady that he’s asked her to perform a difficult task. Even though he sometimes pushes her to a scary edge, Leda is resilient enough to take on the challenge and ask for more.

Grady, too, is nicely drawn. A family man, he is not obsessed with this old case, but he is bothered enough that he can’t let it rest. He’s not too proud to get help anyplace he can find it. He’s willing to put himself on the line to find the truth, so we cheer him on as he and Leda slowly go down rabbit holes until they find juicy carrots that connect the dots.

Priest uses quick-paced dialogue throughout. Leda often jabbers with her friend Niki, which gives us another way to understand Leda’s character. While some of the conversations might be tightened, they do give the book a relaxing rhythm. They invite us to let down our guard right up until Leda gets pulled into another serious aspect of Grady’s investigation.

Priest also sprinkles her text with humor. When she’s at a low point, Leda wryly remarks: “No matter how bad your day, how terrible your choices, how ridiculous your risks, a dog would never tell you how stupid you were.” Leda might have a gift, but she has bad days right along with the rest of us.

Despite her hesitations, Leda is gradually drawn to the joy of helping a detective search for justice. Even though she initially kicked her feet, she comes full circle. Near the end of the book, she’s thrilled to learn there’s been another murder she might help with: “Murder was better than caffeine.” For mystery readers looking for an entertaining read with a character who is off the beaten path, Grave Reservations will be a pleasing entry.