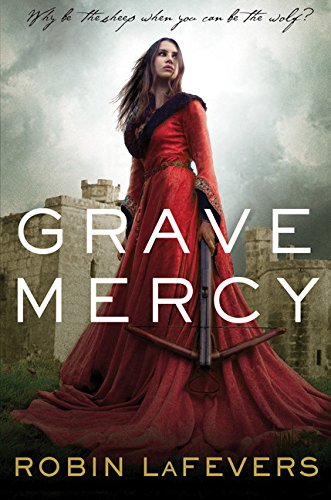 “Read Grave Mercy for the interesting view of history, the mysterious and absorbing religion of assassins, the adventure, the romance, the incredibly fine storytelling. Then share it with everyone you know.”

The His Fair Assassin Trilogy is off to a strong start with Grave Mercy.

Set in a semi-alternate Renaissance Brittany where France is attempting to take over the sovereign duchies around it and remnants of an older religion still hold power, it is the story of Ismae, born to an abusive turnip farmer and shipped off to a convent where she will be trained to be the hand of death, killing those who have been marked by the God of Death himself.

Ismae is meant to be utterly devoted, carrying out her assignments coldly, cleanly, and without question, but when she’s sent on an assignment to infiltrate the court of the child Duchess Anne and find out who is working against her, things start to change. She sees, almost from the first day that she meets Gravriel Duval and sets off on her mission, that things are far more complicated than the convent has led her to believe.

Grave Mercy starts out with abject misery as it follows Ismae’s development from a beaten, mistrustful child bride to a self-possessed, strong, active force in the politics and interactions of the court. It does so with such detail and clarity that the reader can’t help but get swept up in Ismae’s life, making Grave Mercy an involving and rich read.

Better yet, the world the book is set in is shown as far bigger than what we see through Ismae’s eyes, and there’s much to look forward to as the rest of the trilogy explores other facets of it. The religion of people who follow Death without being dead themselves is fascinating enough, especially when he’s one of nine incarnate old gods, but the warring courts and the interesting characters in them make this a book not to miss.

Even when no one knows what’s going on, and no one trusts their own interpretations, let alone anyone else’s, Grave Mercy is never so tangled that it can’t be understood, always deep and well-drawn, and feels real.

Ismae is tough and as sharp as the blades she wields, but is also vulnerable and aware that she’s underprepared for the assignment she’s been given; this makes her immediately relatable and likeable. Duval is strong and principled, and even when Ismae thinks he’s cold and untrustworthy, we see through her that he’s worth liking, and he emerges as an ideal hero for the genre.

As these two work to untangle the allegiances and the betrayals, they come together believably and organically, both realizing they have depths of resources they didn’t know they possessed. All of which makes the story rousing, to say the least.

Though aimed at a YA audience, and therefore vague on the more salacious interactions between members of the court, this book doesn’t coddle or pull punches and does what the best books do: Grave Mercy assumes that the audience is smart and will understand. This makes the book just as readable for an adult as it is for the targeted young adult demographic of 14 and up.

Read Grave Mercy for the interesting view of history, the mysterious and absorbing religion of assassins, the adventure, the romance, the incredibly fine storytelling. Then share it with everyone you know. It’s well worth the effort, and it will leave you wanting more.