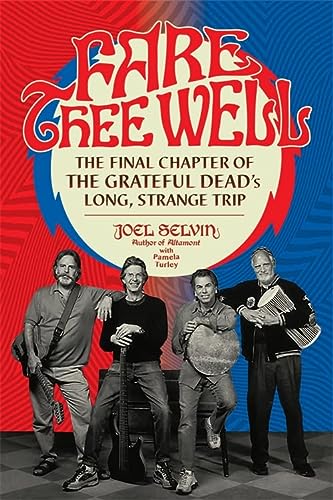 “Fare Thee Well is a passionate and well-written exposé of the behind the scenes action of one of rock and roll’s most iconic bands . . .”

When the Grateful Dead convened on December 7, 1995, four months after bandleader and guitarist Jerry Garcia’s death, the remaining “core four” members decided to bring their collaboration to a close. Bob Weir, Phil Lesh, Mickey Hart, and Bill Kreutzmann had their publicist draft a press release announcing the end of the band. But as we know, the story did not end there.

In the months and years to follow, they each embarked on new music and business ventures: Weir toured his band RatDog; Hart released an album, Mystery Box; and Lesh fronted a rotating cast of musicians in the group Phil and Friends. But tensions persisted—Lesh in particular became increasingly absent from Grateful Dead business meetings—as the core four struggled with defining their legacy.

“It seemed almost sacrilegious to consider replacing Garcia, but there was a need among the band to come to some decision. These men were tired, bereaved, frustrated, and scared, with the enormous weight of the massive Grateful Dead organization on their shoulders and, without Garcia, no idea how they were going to hold it up . . . There were many items on the agenda, but staring everybody in the face was the most basic decision that needed to be made about the band’s future—how they would continue.”

Fare Thee Well: The Final Chapter of the Grateful Dead’s Long, Strange Trip by Joel Selvin takes readers on a turbulent behind the scenes journey as the surviving members of this iconic rock band struggle through two decades of petty squabbles and bickering that eventually led to a fragile compromise and reunion tour in 2015.

Joel Selvin is an award-winning journalist and San Francisco based music critic, who is best known for his weekly column in the San Francisco Chronicle that ran from 1972 to 2009. His books have covered various aspects of pop music and include the New York Times bestseller, Red: My Uncensored Life in Rock with Sammy Hagar (2011).

Fare Thee Well is a comprehensive and thorough tell-all biography; Selvin does an exceptional job of conveying the struggles and emotions that gripped members of the band in the years that followed the untimely death of Jerry Garcia. Without his leadership and Zen like approach to business and life, surviving members were left rudderless, descending into a pit of despair and petty disagreements that often led to deep wounding personal hurts and grudges.

Selvin explores in great detail almost every dispute and jubilantly concludes the narrative with the bands all too brief 50th anniversary reunion tour. The five concerts were billed as "Fare Thee Well: Celebrating 50 Years of the Grateful Dead.” The shows were performed on June 27 and 28 at Levi's Stadium in Santa Clara, California, and on July 3, 4 and 5 at Soldier Field in Chicago, Illinois. The band stated that this would be the final time the core four would perform together. Demand for tickets was high and anticipation from rapid fans was feverish.

“Signs hung from practically every bar, ‘Welcome Deadheads.’ Next Soldier Field, the Field Museum of Natural History got into the act, draping the entrance with three giant banners of dancing tyrannosaurs wearing crowns of roses by psychedelic poster artist Stanley Mouse, who created the original skull and roses for the Dead.”

Overall, Fare Thee Well is a passionate and well-written exposé of the behind the scenes action of one of rock and roll’s most iconic bands and a must read for all “Deadheads” and casual rock historians. Oh, what a long, strange trip it has been.