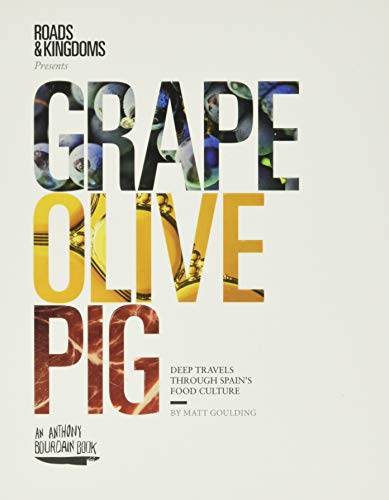 At first glance, the title of this book was somewhat off putting. That quickly changed.

Food and travel writing can be dull.

This book takes on both negatives and gives them a jolt, all to the reader’s benefit in this personal narrative of a young writer’s adaptation to life in Spain, and his falling in love with a Spanish woman and living with her and her family in Spain—all the while becoming passionately immersed in the food and people who live it.

Matt Goulding combines a lot of just good basic travel stuff along with fascinating stories of life in Spain that circulates around food but takes in more than that alone.

Goulding brings out the people and food culture of Spain in a way that few if any food or travel writers can do. Grape, Olive, Pig: Deep Travels Through Spain’s Food Culture is a food lover’s travel guide for the jaded or the first-time traveler.

He manages to balance good basic information such as:

along with visits to offbeat locations with deep insight to food and life in Spain rarely touched upon by tourists.

A “tapas” taxonomy explains the derivation of tapas. Goulding offers a superb and well-illustrated introduction to the most popular and basic tapas of Spain, along with “rules of the crawl:” how to work your way through a number of tapas bars, stopping at each one to eat and drink.

Covered are the important elements of Spanish food culture. Among them, “conservas,” the super high quality canned foods of Spain, certainly not your American canned supermarket stuff.

Octopus, Jarmon Iberico, charcuterie, baby eels (“Anguillas Gellega”) are presented in well-written chapters. A "rice matrix” explains the Spanish obsession with paella and rice. Interspersed are fascinating stories of people who make up the food culture of Spain

Goulding tells of Bittor Arguinzoniz, in the mountain village of Axpe, whose restaurant is fueled entirely by the flames of the hearth, showing, as he says, “everything from the smoked goat butter to the just-cooked red shrimp stands as a resounding reminder that the beauty of Basque cuisine stretches well beyond pinoxtos and pyrotechnics.”

In a chapter on the Basque country, Goulding provides a superb explanation of the rise of Basque cuisine. He digs deep and really gets to the roots. Brought to light are Luiz Irizar, (school of Irizar), Karlos Arguinano, and Pedro Subijana, chefs who laid the ground for today’s Basque cooking, influencing many of today’s important Basque chefs, much as Fernand Pont did in France. “For the Basques, it’s a birthright to eat and drink as well as possible.”

“The best barnacles grow where the elements are most extreme.” In Galicia we meet Susana and Isabel Gozalez. “Percebeiras” or barnacle hunters, gatherers of the gooseneck barnacles in the Spanish Atlantic. Galicia, known for its seafood, has the “percebe,” a premium seafood that Spaniards love—and also, one of the most expensive seafood products in the world. Gathering these delicacies is hard and dangerous work, and Goulding provides an amazing story of women who do this dangerous work and have become important players in what was formerly a man’s world.

We meet a broad spectrum of people: from churros makers; to Fernando Motos Lajara, an old man who has lived most all his life in a cave in Andalusia surviving on migas “the fuel of shepards and pork;” to a remote tobacco shop run by one of the country’s top bartenders, “Kike,” who left the big city and success there to run a tobacco shop and bar in remote Villaviciosa, Asturias, where he stocks more than one hundred gins.

In Cadiz, Meson del Toro, as the author says “doesn’t serve much—sliced meat and cheese and above all, fried eggs served over fried potatoes. Not just any eggs and potatoes, though: both cooked slowly in an abundance of olive oil soft and outlandishly savory.” Not something most tourists would find on their own.

Unusual also was “Anatomy of a Dish” Gin Tonic, which has become a “uniquely Spanish culture.”

In Cadiz, the Atlantic Bluefin tuna is netted every year as the fish migrate from the Atlantic to the Mediterranean to spawn. This is a tradition that dates back to the Phoenicians. It takes two months of hard work laying nets to trap the tuna. The “Almadraba” is the culmination. Goulding devotes an entire chapter to describing the people and the way they live, and also goes deep into the entire spectrum of “Tunanomics:” the people, the business of tuna, and its effect on their life as well as the implications on the world’s economy and sustainability.

The artwork and photography are outstanding. Photos of the people of Spain are interspersed with numerous photographs of various food items shown in such a way that every page has something a bit unexpected.

Matt Goulding nails it. This is good writing. It never drags. The book is hard to put down. It is hopeful he will write more about Spain soon.

Chef Jim Maraldo is Associate Professor of Culinary Arts at the Culinary Institute of America.