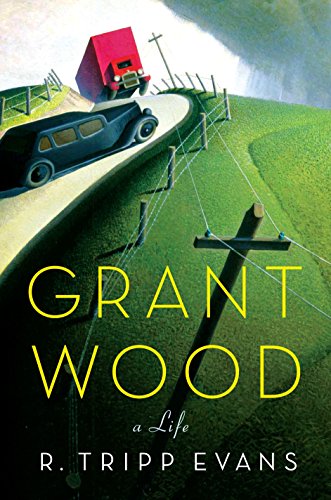 Disappointment comes in many wrappings.

In the case of Grant Wood, by R. Tripp Evans, it comes wrapped in the beautifully reproduced image of Death on the Ridge Road, Woods’ startling and arresting study of the moment before the impact as a car steers around a curve into an oncoming truck. Although the faces of the drivers are not seen, their emotions are on display all over the place—in the elongated movement of the vehicles, in the shrugging landscape, and, most of all, in the cross-shaped telephone pole that stands in the foreground, not upright, but pushing itself away from the impact.

With such an impressive cover, those judging the book by it will assume that, inside, lurks writing of equal impact. Sadly, in that they would be mistaken.

Dipping inside, it is easy to get lost in the pictures themselves, which have been lovingly reproduced in full color. But just as the reader is pulled in by Woods’ stylistic paintings, the author seems to have been as well. An art historian by training and a professor of art history by profession, author Evans seems ill at ease in writing about anything other than the paintings. And, thus, the Grant Wood who painted them gets left behind.

The sad thing is that the reader comes away from Grant Wood not knowing anything more about him than he or she likely did before reading the book, i.e. that Wood was born in Iowa and named for Ulysses S. Grant, that he was overwhelmed by his mother Hattie who anchored him to the middle America instead of allowing him to fly free; and that he was likely a homosexual, or at least, a man who yearned to be allowed to have sex with other men. Indeed, when it comes to details that would allow us to get under the great artist’s skin, we are given such short shrift that perhaps instead of Grant Wood the book should have been called Grant Wood’s Paintings.

Ah, and it is when we get to the paintings themselves that author Evans comes into his own. While the rest of the book reads as a series of random Tweets, Evans’ deft interpretation of each of Woods’ major works, from Woman With Plants to Portrait of Nan to his most famous and oft-copied work American Gothic, are filled to overflowing with ripe and vast details—details that seem to offer us equal parts Freud and Hilton Kramer. One might question the certainty of Evans’ interpretations of Woods’ work, especially where sexuality is concerned, but no one could question his scholarship. As a book of art history, Grant Wood is an impressive, cogent work. As a biography of an artist, it leaves the reader asking not just for more, but for something, anything that could allow the experience of the book to be more than merely educational.

As published, this is a book without a clear niche. Is it a textbook? If so, why does it go on so about the artist’s sexual nature (without ever giving clear details as to how that nature was acted out—or not, as the case may be) and take us step by step through the author’s narrow wanderings? Is it a full-fledged biography? Then where, oh where is the bio that we are graphing?

Here, we come close, if only for a moment, as Evans quotes from a radio play of Woods’ life that Wood himself co-authored with his secretary, Park Rinard. Evans writes: “The play’s opening scene includes a speech from Maryville (Grant Woods’ father), who pronounces to his wife: “I’d hate to see him grow up to be a picture-painter. I want him to be a real man.” In the subsequent scene, the teenage Wood haltingly confesses his wish to be a painter; to this, his grandfather DeVolson Weaver explodes: “A painter! You mean an artist? Of all the nitwit ideas! Painting’s all right for women. But for a man—Bah! It’s like tatting or crocheting. I’m ashamed of you.”

To put Wood in the context of his era, it is important to remember that, in his lifetime, the word homosexual had only recently been coined and that 18 states in these United States had laws on the books that allowed for the castration of male homosexuals. So it is not surprising that Wood would not have openly expressed his affection for any of the number of men with whom he had “intense” friendships. What is disappointing is that, again, what the book has to offer us is only conjecture, much do-it-yourself psychoanalysis and nothing much in the way of real understanding of the nature of this man who defied—and yet, somehow, did not defy at all—the mores of his day. With such a dynamic emotional tension inborn in the man by the time and geography of his birth as well as the opposing nature of his own needs as a human, Grant Wood offers us such tantalizing possibilities. And yet none are realized.

Those seeking to be reminded of the genius of the bespectacled Wood will find much to admire in Grant Wood. Those seeking an understanding of not just his work, but of the man himself will likely reach a point of desperation around page 194, when they suddenly realize that, in this book of portraits, no portrait of Grant Wood himself is forthcoming.