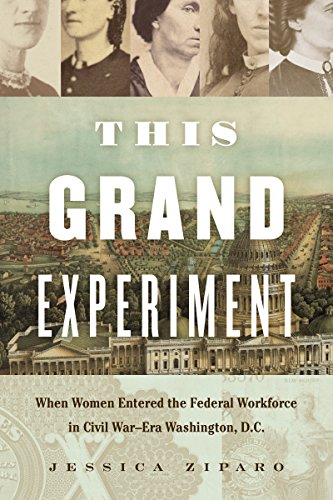 “In This Grand Experiment, Jessica Ziparo tells the history of female federal employees in Washington, DC, 1861–1865, ‘an important but overlooked, cadre of labor feminists in the struggle for women's rights in America.’"

In the traditional public consensus American history, women played little more of a role than as nurses and in knitting socks in the Civil War. They actually ran farms, worked in factories, and did much more; however that narrative seldom even discusses prostitution and rape.

In This Grand Experiment, Jessica Ziparo tells the history of female federal employees in Washington, DC, 1861–1865, "an important but overlooked, cadre of labor feminists in the struggle for women's rights in America.” "Discouraged from advocating for political equality, [they] sought greater labor equality without the help of the women's rights movement."

This period coincided with the "an evolving movement of female autonomy" in a "new economic reality." Ziparo discusses this growing scholarship in women in the Civil War in the book's introduction.

Competition with banks and merchant houses for qualified men "willing to work for the salaries offered by the government" created the grand experiment of women federal employees. The federal bureaucracy expanded and continued to grow after the war.

"The supply of women seeking the well-paid, intellectually challenging civil service work far exceeded the number of jobs," however. That became another factor blamed for "the dashed possibilities for labor equality in 19th century America."

Women had quietly begun to enter the federal government work force before the war. Virginia Penny published a list of 500 positions open to women but the desperate "wives, daughters, and sisters of soldiers" wanted the better paying, less demanding government jobs in Washington.

"The federal government employed several thousands of women during the 1860s," wrote the author, with the Government Printing Office "at least one-third female in 1862." Washington became a battlefield for "gender labor equality" and for "equal access for men and women to positions, promotions, and pay."

Female federal employment had come to stay. At the end of the war, they generally "did not lose their positions in mass to boys in blue." Even by 1871, more than 1,000 of women worked in several different federal departments and mixed race "in both clerical and manual positions."

Problems arose from the beginning, however. Women "had to appear deferential to men." "Taking a job with the federal government, middle-class white women challenged nineteenth-century societal norms" and "they were caught in a struggle between traditional, cultural notions of female dependence" and autonomy.

Issues of what a woman could do better such as supposedly counterfeit detection clashed with her alleged limitations. The Treasury Department abounded in such tedious manual jobs for female employees at half the pay of their male counterparts.

Ziparo uses that topic as a forum for outlying the prejudices against women, problems of supervision, and the limited opportunities for advancement in the period. Several pages of the book discuss the infamous sex scandal in the Treasury Department in 1864 that damaged the general reputation of female federal employees.

The women did "the same work," but the government "did not pay them the same salaries." They began a decade's long struggle for fiscal equality knowing that dismissal could come at any time. Their cause suffered defeat then (as now) by a failure to see women as employees but rather as "objects of paternal pity or sexual desire."

Few of these women were "consciously part of what historians usually describe as the women's rights movement." It "was a system forged in the exigencies of the Civil War and hardened by the ambitions and persistence of the women of America."

The "struggles and achievements of female federal employees occurred in full view" of the nation but changed nothing. Even as "women moved into private clerical workforce, their smaller salaries followed," Ziparo writes.

The author also "found essentially no evidence of support from white female employees for the rights of their African American female coworkers." Nonetheless, "These women helped to break down some of the cultural and economic restrictions that constrained nineteenth-century middle class white women."

This Grand Experiment tells the story of these American workers by who they were (chapter one) through the beginnings of the campaign for equal pay (chapter seven). Other chapters describe employment, narratives of dependence, sexuality, life, salaries, and public perception.