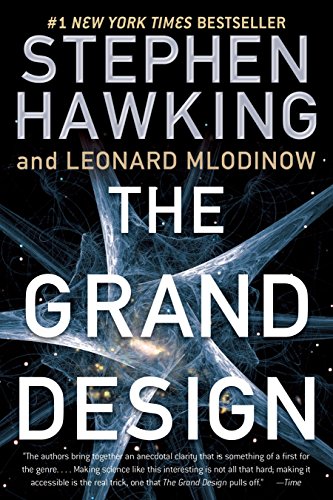 Warning: If any scientific phrase starting with the word “quantum” scares you, if you do not believe Bill Nye the Science Guy when he says “science is cool,” if you could not get through Stephen Hawking’s A Brief History of Time, move on.

However, if you are searching for the answer to “Life, the universe and everything:” Why is there something rather than nothing? Why do we exist? Do we need God to explain the beginning?—then this is the book for you.

The Grand Design is the follow-up readers have been waiting for since the publication of Hawking’s A Brief History of Time. Hawking and Mlodinow, in their attempt to answer these questions, the authors bring us into the worlds of the very large and the very small, of overlapping theories, and of the idea that the universe has (at least) 10 dimensions plus time. They give us a glimpse of the Holy Grail of science: the possibility of a Theory of Everything.

We are also, for the first time in Hawking’s writing and science careers, brought face-to-face with the other ultimate question: Should God have a role in the creation of the universe?

From a scientific standpoint, Hawking brings forward the “classic laws” of science, starting with Aristotle and leading to Sir Isaac Newton and Albert Einstein—all in attempt to discover the “Theory of Everything.” The authors take great pains in traversing this world, allowing the reader time to absorb the information provided. And it is here that the reader’s knowledge of science is so important.

If you are unfamiliar with Richard Feynman, Michael Faraday, James Maxwell, or Max Planck, you may get lost. If you do not know the basic Newtonian laws or that 10 to the 500th is an incredibly large number, the concepts might elude from you. You may find yourself returning to your high school physics text for a quick refresher. But The Grand Design is worth it.

The authors’ primary focus is to introduce the reader to the possibility of the “Theory of Everything,” the M-Theory, and how it was assembled. The book provides the reader with an understanding that the laws of the extremely microscopic are also the laws used to discover the beginnings of time and space. These goals are met cleanly and without belittling the reader.

The second focus, intended or not, brings The Grand Design to a new level. Most popular books on science do not delve into the question of God and the notion of whether we need to incorporate the supernatural into the theories of our existence. Carl Sagan accomplished this in A Demon Haunted World, but more in terms of critical thinking than math and science.

In describing the concept of “model-dependent realism”—that our scientific and personal models are based on our sensory clues and perceptions—Hawking lays the groundwork for answering the question of the need for God as described in the biblical creation story(ies), while not attacking the Abrahamic religions.

Hawking attempts to answer the question of what was there before God or the singularity. Hawking writes, “The realization of time that it behaves like space (Einstein’s space-time continuum), presents a new alternative. It removes the age-old objection to the universe having a beginning, but also means that the beginning of the universe was governed by the laws of science and doesn’t need to be set into motion by some god.”

Hawking opens this text with the assumption that philosophy has not kept up with the advancements of mathematics and science. Here he is wrong, for Hawking and Mlodinow are suggesting a new philosophical model of the creation, one that may lead to the next question, “Do faith and science meet at the same singularity, both asking the same question: What was there before God or the Big Bang?”

The Grand Design is not for those who are scared of questions about the intersection of faith and science. This is a book for the inherently curious, those who can reach beyond their personal sectarian and secular worldviews. For, as Hawking suggests, it really boils down to one’s model-dependent reality.