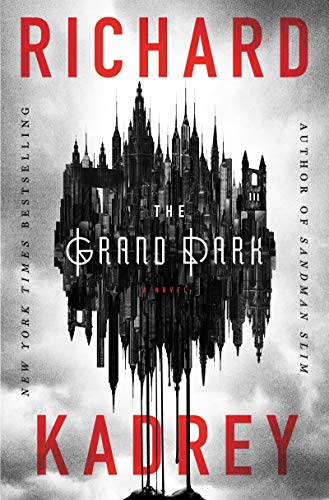 “The Grand Dark doesn’t rise above the pulpy, overwrought drama of the eponymous theater’s productions. It’s readable, and competent, but it’s not, finally, smart.”

Richard Kadrey has a well-established reputation in supernatural noir fiction. His Sandman Slim novels are enormously popular urban fantasy, with a film version in development. Like so much noir, Sandman Slim relies on hard-boiled narration, a ragged and vengeful male protagonist, bombshell women, and the stark city of Los Angeles.

The Grand Dark is not part of the Sandman Slim series. It’s set not in the gritty streets of L.A. but in the fog-drenched alleys of Lower Proszawa, a steampunky, Weimar Republic-esque city in some unnamed other world.

Neither is The Grand Dark fantasy. Instead, it relies on alt-technologies: robotic “Blind Maras,” a vaguely telephonic “trefle,” and biotechnologically engineered “chimeras” ranging from tiny, light-emitting entities who light up goggles to monstrous semi-dogs bred for combat in the recent, devastating war.

Post-war malaise sets the tone. While Lower Proszawa doesn’t seem to have precisely lost the war, neither did it win, and the postwar period is one of drug-fueled decadence and economic decline. Maras are rapidly replacing workers, there’s widespread inequality, and social upheaval seems imminent. Protagonist Largo skirts the edge of that chaos, working as a suited bicycle courier who knows the street map of Lower Proszawa intimately but who fails to recognize the intrigues at work until they swallow him up.

The upheaval seems more focused on artists than workers. (The Grand Dark isn’t a socialist text, or even a particularly political one, which is somewhat odd given the plot’s insistence on political intrigue.) The artists and their friends gather in parties sponsored by the wealthy, “reclining on the floor atop pillows and draped on the sofa. . . . Largo recognized Enki Helm, the blind painter who worked in the absurdist Xuxu style more, Largo suspected, out of luck than talent. There was Bianca, an aspiring opera singer . . . who—famously—was discovered while singing for pennies in the streets.” These artists live glamorous, bohemian lives, struggling to eke out a living like Christopher Isherwood refugees.

The novel’s Sally Bowles is Remy, a beautiful, drug-addicted actress and unlikely girlfriend to loser Largo. Remy performs at The Grand Dark theatre, manipulating on-stage robots that play out gruesome tabloid stories of betrayal and murder. Remy’s origins are shrouded, but her beauty shines. For most of the book, it’s unclear what Remy wants, other than drugs and Largo. She’s very much the object of Largo’s desire, and eventually, perhaps inevitably, also the object of desire for old, evil men who will either have her or see her die.

Meanwhile, Largo finds himself entangled with the Nachtvogel, the city’s terrifying secret police. The Nachtvogel offer the most interesting possibilities in the novel. There are echoes of China Miéville’s The City and the City, which also uses the cultural anxiety of eastern Europe to explore the tensions of urban space. Kadrey’s scenario has the potential to explore the nature of secret policing in the maintenance of power, or to imagine scenarios for the force’s necessity or lack thereof.

Sadly, Kadrey isn’t engaged in anything so complex. He routinely chooses high-action, dramatic sequences that would film well but that offer little beyond surface excitement. The Grand Dark is ambitious, but its threads fray without forming a single tapestry.

The chapters of “scholarly” history offer world-building, but don’t contribute to the overall plot. The conspiracy (there had to be a conspiracy) is political in nature, but the city’s politics aren’t particularly clear, and the novel doesn’t offer commentary on how power functions in that world or this one. Largo may be at a crucial juncture, but it isn’t one he understands.

Ultimately, The Grand Dark doesn’t rise above the pulpy, overwrought drama of the eponymous theater’s productions. It’s readable, and competent, but it’s not, finally, smart. Lower Proszawa is a potentially fertile setting, but in The Grand Dark is grows only paranoia and insubstantial nightmares.