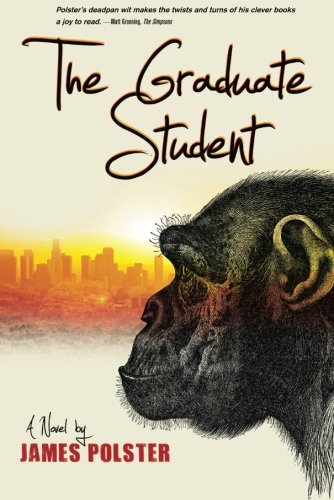 “Buy a ticket on this Marrakesh Express and enjoy the ride.”

If you’re looking for a story to assuage that longing for a Hunter S. Thompson-esque escapade, The Graduate Student might just fit the bill.

James Polster’s third novel is not so much a rollercoaster ride, but more a Marrakesh Express trip around the Amazon, L.A., academia, and the world of robotics. Pause to reflect: Do we see certain similarities between these elements? As the characters and story unfold, believe it or not, we most certainly do.

We are introduced to Blackwell James, our student protagonist, as he leaves the compelling world of the South American jungle and returns to his college with nothing more than a collection of hallucinatory jungle vines to his name. While thankfully free of lingering diseases, parasites and snakebites, he arrives at Professor Templewood’s desk at Columbia University with little research detail and even fewer notes to support his Ph.D. research. Surprisingly inventive, the professor promptly dispatches Blackwell to U.C.L.A., where Blackwell’s collection of vines is hotly sought after in an experiment involving robotics, chimpanzees, and more than a few wealthy—if shady—Hollywood characters.

The parallels between various Hollywood movers and shakers and the robots and primates is inescapable and adds a strong subtext to what is, on the surface, a fast-paced thriller. There may be too many characters, perhaps too many obtuse red herrings and subplots, but the reader is so absorbed by the main thrust of the storyline that these are only considered after the final page—and by then you’re already thinking about re-reading it! Yes, it’s that good!

This is the third novel from Mr.Polster, the first two having been recently republished after Guest in the Jungle and then Brown appeared to considerable acclaim in the late 1980s and early 1990s respectively. Mr. Polster is credited with being a lone, early voice in the damning of deforestation in the Amazon basin, and wisely chose the voice of fiction to bring this knowledge to a wider audience. The reissue of these earlier novels is both welcome and timely, made all the more exciting by the sense that author Polster—like the character Blackwell—may have originally stumbled into the scenario he championed, rather than seeking it out.

Mr. Polster’s style of writing is relaxed and highly readable. He is a fabulous example of what could be called a “Gonzo novelist:” a credible and well-researched writer, thanks to his own exploratory trips around the world, giving the reader the overwhelming sense of being in this place he creates in the novel as opposed to merely witnessing the story’s narrative from a distance.

Undoubtedly, Mr. Polster has his eye on Hollywood, not only with his storylines but also his style of delivery; Fear and Loathing in Las Vegas springs to mind in more than one chapter. The delivery of words as lines rather than prose jars a bit at times, but with overwhelming wit and breakneck pacing, is easily forgiven.

Buy a ticket on this Marrakesh Express and enjoy the ride.