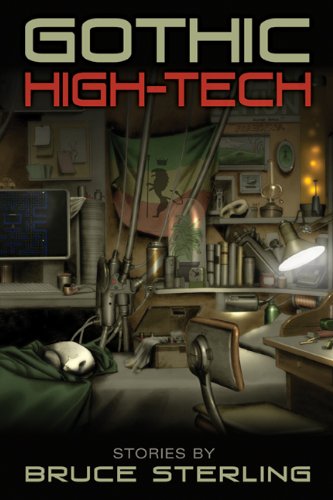 “Bruce Sterling has managed to pen a delivery vessel for a futuristic, anarchistic, dystopian idea of human potential. And in the end, Gothic High Tech leaves the reader with the notion that even with all this mess, there are ways out of every quandary—even if those ways are unimaginable now or far different than we’d hoped.”

Gothic High Tech reads like a trilogy of mosaic novellas. This book of short stories is divided into three parts, and each part—though concerning different people in different places and lacking any sort of crossover between the stories there—has the feel of a unified world.

Furthermore, those three unified worlds, though wildly different have a general feel in common, and it’s easy enough to see them as different aspects of the same world. It is a context where the weird new machines just ahead of our present time have changed everything, but the average person is still left coping with life as best as he or she can.

These are not stories of a post-human future—at least, not for the characters in question. There is an idea that someone, somewhere, might be on that path, but the characters dealt with here are usually ordinary people made to deal with extraordinary situations—usually after something has destroyed the old way.

The narrative voices in the early stories are accessible, and if the narrators are somewhat unreliable, it’s because their points of view are based on an incomplete understanding of their world or of the replacement world.

As the book progresses, the stories become denser and stranger. A genie/demon claims the soul of an Italian executive and takes him to a bizarre Italian version of hell that is both horrifying and sharply satiric.

An assassin manages to do absolutely nothing while somehow maintaining his extremist fervor.

People’s lives get tangled up in politics and change and result in outcomes no one could have foreseen.

Gothic High Tech is not a quick read, but it’s not particularly difficult to consume. It appears to have been designed to throw so many ideas at you—many of them simply very strange—that it forces you to stop every few lines and mull over what has been conveyed and what it means that these particular people are doing these specific things for whichever reasons are proffered by the author.

Gothic High Tech is a somewhat bleak take on how the future can go. Yet is also offers up a fundamentally optimistic view: that people will always be recognizably people, and even when things go horribly awry, they will still act as people do now—and usually for what they feel is best.

Some of the stories even manage to result in an anarchistic sort of rebuilding, suggesting wild but attainable ideas of better ways to run countries and cities.

Gothic High Tech is a book that will stick with you. Ideas explored in its pages will linger in your mind and surface later, when you’re reading the news or watching movies.

Bruce Sterling has managed to pen a delivery vessel for a futuristic, anarchistic, dystopian idea of human potential. And in the end, Gothic High Tech leaves the reader with the notion that even with all this mess, there are ways out of every quandary—even if those ways are unimaginable now or far different than we’d hoped.