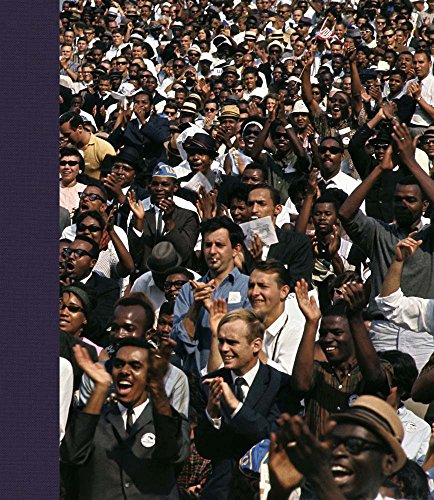 Gordon Parks: I Am You: Selected Works 1942–1978 is an astounding book displaying the remarkable photographic talents of Gordon Parks, a man who was equally at ease in documenting the Civil Rights movement of the 1960s, as well as photographing glamour fashion models, European heads of state, gang wars in Harlem, celebrities, or Malcolm X with the Black Muslims. Parks enjoyed a long career as a distinguished photographer, writer, musician, and film director.

He was the first African American to be hired by Life magazine and the federal government’s FSA (Farm Security Administration). And while there is something to be said for being the “first” in many categories it was Parks’ incisive and insightful photojournalism that challenged racist attitudes. He was also the first African American to direct a major Hollywood motion picture, The Learning Tree, which was based on his own bestselling novel, and he later directed Shaft. His photo essay on the black ghetto in Harlem Is Nowhere, 1948; or his essay Ingrid Bergman on Stromboli, 1949; or the desperate poverty in Brazil’s favelas (slum areas) in Flavio, 1961—all show a tremendous sense of empathy, caring, and a brilliant sense of timing.

Parks’ outstanding photojournalistic piece on Harlem’s gang war demonstrates the high level of commitment he brought to his work. He embedded himself in the gang for four weeks to gain their trust and document their violent story. His powerful black and white photographs display a brilliance of technique and sensibility in capturing the moment, that places him on an equal level with the work of W. Eugene Smith or Henri Cartier-Bresson. Titled “Harlem Gang Leader,” the photo essay printed in Life magazine in 1948 astonishes one with its perception and bravura.

His coverage of the Ingrid Bergman story in Italy, Ingrid Bergman on Stromboli, 1949, also surprises with its level of sensitivity and compassion for the scandalous lovers, Bergman and Roberto Rosellini. The Swedish actress and star of Casablanca, Ingrid Bergman, had fallen in love with Rosellini and deserted her child and husband in the United States. The Italian neorealist film director, Roberto Rossellini, was already estranged from his wife but abandoned his actress lover, Anna Magnani. The story was worldwide news in 1949 and culminated in Bergman being publicly denounced from the floor of the U.S. Senate and effectively exiled from the American film industry for six years. Parks was able to document the conflicted passion of the two lovers while exhibiting the uncanny ability to discreetly and sensitively record their situation without compromising the truth.

Parks was born in Fort Scott, Kansas, in 1912, and was no stranger to racism or social injustice. He attended a segregated elementary school, but since the town was too small to afford a segregated high school he had to attend a school were blacks were not allowed to play sports, or attend social activities, and were actively discouraged from planning to attend college.

That Gordon Parks, orphaned at the age of 14, was able to struggle on, working as a bus boy, brothel piano player, and traveling waiter on railroad dining cars; that he was able to buy a used camera, teach himself photography, and become employed by one of the most visible publications in the world, is not only extraordinary but also a heroically triumphant story. What is equally remarkable is that Parks never became embittered but retained the heart of a humanitarian, as exemplified by his attitude for the delinquents in Harlem gangs or his caring for the young boy, Flavio, in Brazil, whose life he changed.

Parks worked as a photographer for Life magazine for over 20 years with a variety of film formats, and several of those stories are featured in this book. While the majority of the photo essay photographs are in black and white, there are extensive sections that are reproduced entirely in color, such as, Fashion, 1956–1978; Segregation in the South, 1956; Crime, 1957; as well as The Learning Tree and The March on Washington, 1963.

Gordon Parks: I Am You is a large format book—approximately 10 x 11.6 inches—superbly printed on heavy weight paper by Steidl, and indeed it is difficult to imagine anyone achieving a higher quality of reproduction in printing these photographs. Steidl has accomplished it masterfully on premium paper. The 288-page book comprises 18 sections of selected photo essays shown in chronological order, and each section is introduced with a contact sheet of photographs or color transparencies taken during that session.

Included in the book is an excellent essay by Felix Hoffmann, “Sequence and Series: Photographic and Filmic Thinking by Gordon Parks,” and an introduction by Peter Kunhardt, Jr. of The Gordon Parks Foundation.

Gordon Parks died in 2006 at age 93, but his legacy lives on through the Gordon Parks Foundation. (Although unrelated to this book, fans of Parks will enjoy a wonderful biographical film documentary created in 2000, titled Half-Past Autumn: The Life and Works of Gordon Parks.)