Googled: The End of the World As We Know It 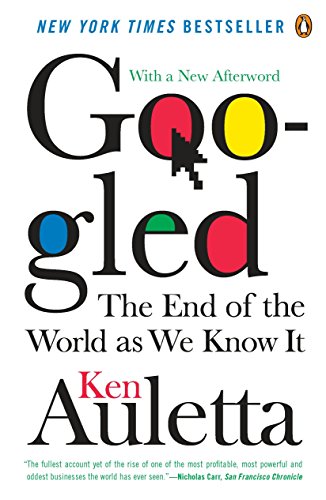 The cliché is that we live in an age of celebrity—where even our current president is revered more for the role each of us projects on him (Avatar of racial progress? Pioneer of multiculturalism? Cool, pragmatic exponent of progressivism?) than for any political accomplishment.

Such a notion could be extended to the business world, where corporations have had their pet A-lists like the Dow Jones 30 and the Fortune 500, both created decades ago in a more sedate media world.

So, where General Motors, Kodak, and Sears were the creaky Joan Crawfords, Tyrone Powerses, and Bette Davises of their era, Google is our own Brangelina. And Ken Auletta, author of Googled: The End of the World as We Know It, has deftly charted the rise of American commerce’s newest American idol.

No one should doubt that Google is a celebrity powerhouse, the 800-pound gorilla of the Information Age. It is the de facto gateway to the Internet. Consider the numbers: Google’s YouTube had 90 million unique visitors in March 2009—two-thirds of all Web video traffic. Google’s advertising revenues—more than 20 billion dollars a year— account for 40 percent of all the advertising dollars spent online. Its news service aggregates 25 thousand news sites daily.

Though other companies have far more employees, assets, and revenues, the company’s profit growth ranks first among the Fortune 500. More telling, its name has become a verb; you don’t search for information on the web, you google it.

But, if Google the corpus is a celebrity, its founders Sergey Brin and Larry Page are, Auletta reveals, something more problematic. Computer engineers to their very marrow, Brin and Page are considered brusque and intimidating by many within and outside the company’s headquarters in Mountain View, California.

Auletta writes “part of their rawness is due to the fact that they are geeks, more comfortable staring at a computer screen than schmoozing . . .” As we learn, it is clear they are smart, but not necessarily wise, men. They have yet to encounter setbacks or failure that might provide perspective. Their brilliance and success move people, “but not their words or the symbols they evoke.”

Then, Auletta presents us with a doubly chilling statement: “Google’s leaders are not cold businessmen, they are cold engineers.” In this one line, the Googleplex becomes the House of Atreus, its course charted. Still, the technologists are out to change the world, as the third member of Google’s leadership troika, CEO Eric Schmidt, avers.

Yet what keeps Schmidt’s legal department awake at night is—ironically, in the age of celebrity—the third rail of the Internet, privacy. Google’s computers now contain a tremendous amount of data about its users, and this database grows exponentially as search and a variety of Google services multiply.

Such power makes activists and governments itching for a fight. Google declares that it has safeguards but, like a hulking teen, doesn’t quite know its own strength. In one of the book’s most telling anecdotes, a trade reporter uses Google’s own tools to locate Schmidt’s home, approximate net worth, political contributions, and other personal information. Google (and presumably Schmidt) was so upset that it would not respond to requests from the reporter’s organization for a year.

Google’s success depends on the trust of its users, but its size makes it an inevitable target. With an ethos that, according to Auletta, “questions everything and believes in acting without asking for permission,” it seems to invite confrontation.

Indeed, it has already felt China’s heavy touch, having had its source code cracked by government-aided hackers. In Italy, three Google executives have been convicted of violating privacy laws, and the European Commission has launched a preliminary antitrust investigation into Google’s search engine and advertising service. The company also awaits the results of separate U.S. copyright lawsuits initiated by book publishers and the media conglomerate Viacom.

Google’s paradox is that although search is its core activity, advertising is how it makes money and what makes it so feared by so many companies. It has offered advertisers a cheaper, more targeted, more measurable way of reaching consumers. In the process, it has taken out the mystery that advertising agencies, newspapers and television networks have maintained over their clients. This is a good thing as Google has provided the answer to the adman’s bromide “I know half of my advertising works, I just don’t know which half.”

Auletta, who writes the “Annals of Communications” column at The New Yorker magazine, is one of our best practitioners of long-form journalism. He was given unprecedented access to Google and has made the most of it with prose that swings: crisp sentences, expert pacing, and anecdotes that pop.

Even better, unlike several authors whose Google writings read more like long fan letters, Auletta balances his regard for the company’s accomplishments with insight into the company’s blind spots—foibles that are already causing the same kind of problems that

At its heart, Googled is a book about dislocation, where traditional brands like the New York Times, MGM and NBC helplessly watch their industries and markets shift to a new generation of technology and business models.

Its apocalyptic title notwithstanding, Googled: The End of the World as We Know It would draw a knowing chortle from the apostle of capitalism, Joseph Schumpeter, who championed the notion of “creative destruction”—the-out-with-the-old, in-with-the-new cycles that are inevitable in societies that encourage invention, discovery, entrepreneurship, and competition.

For here is the nub of Auletta’s wonderful reporting and insights: The fact that you are reading this review on a device connected to the Internet—neither of which existed 25 years ago—both validates and contradicts the book’s title. The “we” for whom the world will end are those who, in an earlier era, manufactured buggy whips as Henry Ford brought a horseless carriage out of his workshop.