The Good Wife of Bath 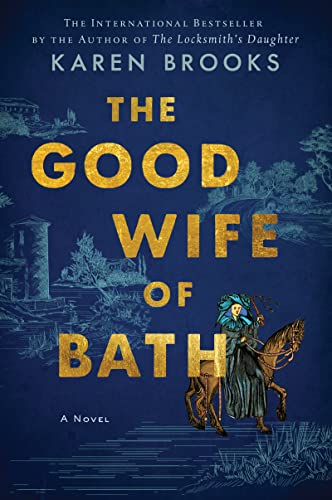 The world in which Geoffrey Chaucer created his considerable body of writing often painted women as the gateway of the devil, insatiable sexual monsters who consumed their men with their crude, lascivious desires. Unreliable, duplicitous, plotting, untrustworthy. In short, to blame for everything. That world is Medieval England from 1364 to 1401, a society unfriendly and violent to women, in which a woman’s value rises and falls according to her marriage status.

In the prologue to the magnificent The Good Wife of Bath by Karen Brooks, Eleanor/Alyson from Chaucer’s Canterbury Tales tells her side of the story and invites the reader to decide which version is more authentic, hers or Chaucer’s.

The story’s protagonist, 12-year-old Eleanor, is “caught” in the midst of a rape by a priest, and for her punishment is married off to a grandfather figure named Fulk Bigod, a stinking, filthy sheep farmer whose vocabulary is a slim variety of grunts and who is rumored to have murdered his former wives. Never mind that it was a priest who wouldn’t take no for an answer, never mind that Eleanor’s historical trendsetting #MeToo moment (500+ years before it’s time) saw her skirt pulled up over her head when the tsk-tsk-ing villagers came upon them.  This twist of fate in the first chapter puts the reader squarely in Eleanor’s corner as she accepts her penance as a child-bride, a disgusting arrangement that prevailed as the social norm.

But surprise! The young Eleanor transforms Bigod’s farm and his life with the good business decisions she makes as his teenage wife. And after the shit is washed off the nooks and crannies of Bigod’s aging body, it turns out he’s a kind and considerate man who eventually becomes his wife’s lover—by her own choice and with her lusty enjoyment.

She meanwhile teaches her craft, spinning, to other servants of the house until they excel at it and with proper management of the lands and sheep, the household begins to make a sustainable income. But the reader knows the world of Fulk Bigod is not long for this world as Eleanor has predicted in the Prologue that this story is not over until she marries four more times. What is at times a serious account of a life lived during The Dark Ages is also a practical study on survival as well as a wild romp through the five marriages and lovers of the fulsome, red-head Eleanor, lifelong friend to Geoffrey Chaucer. The novel gallops along as she takes on each new husband and the challenges of his life and holdings: the reader can’t wait to see and hear more.

The historical nature of this book has been diligently researched and transformed into a rollicking narrative full of details of the times, including the delightful use of vocabulary such as mayhap (maybe), queynte (cunt), Godsib (good friend), pottage, kirtle, and others sprinkled throughout in context. Curiously, the pre-marriage descriptions of the men who would become Eleanor’s husbands, their place in life, their age, their attractiveness, their wealth and disposition seem to change from the moment she is wed. This surprise depicts each husband as a unique human being, not simply a man to rail against. It also paints in relief, the complex situations created by the society so heavily tilted toward male privilege and dominance.

In most developed countries, the status of women could be assumed to be better now that 650+ years have passed, as well as social revolutions upgrading women’s lives and rights, but it’s also interesting to understand the well-worn marginalization of women so clearly considered by this story. The bells of resonance echo loudly in the events that are not so different from today’s. There was even a plague, The Botch); and The Murrain, afflicting sheep and cattle. And with the constant drinking of wine, ale, and spirits, the lack of hygiene and medical knowledge, these pestilences ebbed and flowed, often killing off numerous characters in one fell swoop.

The other noteworthy parallel to today’s world is the power of group-think, the swaying of opinions by a mob. Scapegoating and name-calling worked in those days as well as anti-vaxxers is an effective tool for marginalization today. “Cue the chorus,” Brooks writes as Eleanor is yanked up from the priestly rape. To which everyone around piles on with “You dirty little slut! You foolish wench. What would your mother say?”

What becomes more evident as the novel progresses through five marriages, several pilgrimages, excesses of wealth and poverty, murder, and intrigue is this brave and resourceful woman’s determination to make her own choices for her life, to live according to her desires and personal necessities. Husbands be damned, if that’s what’s required. Evelyn decides—not for her husband, but for herself, in spite of the vagaries of luck and societal hurdles thrown into her path as a woman.

In The Good Wife of Bath, the author’s diligent work sorting fact from poetry creates a fictional but believable character who lives and breathes in every word of this satisfying, page-turning novel. Karen Brooks defiantly rewrites history into herstory.