Good Talk: A Memoir in Conversations 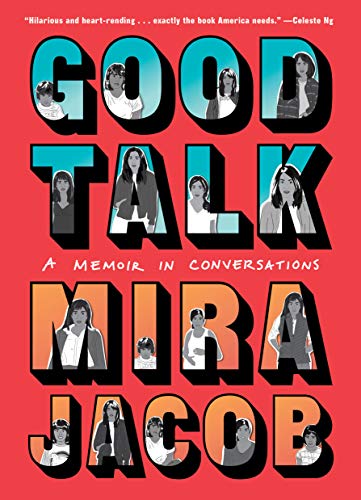 “This book offers a sweet ray of hope in a very confusing time.”

Good Talk by Mira Jacob, the award-winning author of The Sleepwalker's Guide to Dancing, opens with one of the many wonderful talks she has with her young son, Z. The book's best moments appear in Z's frank questions and Jacob's attempts to answer them as honestly as possibly. “Was Michael Jackson brown or was he white?” Z wants to know.

“Are you going to turn white?”

Z's perspective, his earnest efforts to understand the confusing dynamics of race in this country, provide a framework for Jacob's own exploration of being brown in shifting times, starting under Bush to the current Trump administration. From being mistaken for the help at her a party at her in-laws to wrestling with how to identify herself on a radio talk show (her preferred label of “East Indian” was rejected as confusing, finally settling on the more commonly used “South Asian”), Jacob is funny and sensitive when detailing the mine field she has to navigate.

“The days I couldn't get work I would walk around the city and try not to panic about my bank account or the jobs I didn't hear about, or the jobs I did hear about but knew I'd never be considered for, or the things people told me once they knew I wanted to be a writer.”

“The Web has lower standards. Maybe start there.

It's an unpaid internship. We all pay our dues.

She used to be an editor but she's looking for a nanny. You want to connect?

No serious writer would write for the Web.

God, if you can't get a job with the whole diversity thing, the rest of us are fucked.

Too bad we've already had our Indian Lit moment.

Don't ghettoize yourself with ethnic writing.”

There's a long section on how her Indian relatives considered her unmarriageable because she was not “fair” enough, proof that every minority has its own biases. Jacob's relationship with her parents, Indian immigrants who had an arranged marriage, is beautifully described, including her stunned discomfort when, after decades together, she glimpses real affection between them. She calls her brother in a panic, “It's like they've . . . fallen in love? I mean, the other day I saw . . . They were kissing by the fridge.”

The one misstep in all this sensitivity is her own husband, Jed, whom she calls a “Caucasian Jew,” lumping him with white people of privilege. Only recently have Jews been considered racially white (American records earlier this century listed Jews as of the “Hebrew” race), though they still aren't considered white by white supremacists and many Americans. Jews may be a successful minority, as Jacob herself calls East Indians, but they are very much a minority. There are far fewer Jews in America—and worldwide—than there are East Asians, Asian Americans, Latinx, African Americans, Arab Americans, and Muslims, fewer than 2% of the U.S. population.

Jacob's many references to Jed's whiteness hits a sour note, especially as she talks to their son and presents whites as scary, the ones oppressing brown people like Z. The fact that anti-Semitic incidents have risen sharply, with more Jews being attacked than any other group since the start of the Trump presidency, is not mentioned, though police killings of black men are. This lack of balance, of understanding of other forms of discrimination mars an otherwise deeply honest and sensitive story and is surprising given her husband's background.

The other jarring note in the book is the artwork. Each character has a fixed representation that is cut out and used over and over again against photographic backgrounds. Although this makes it easy to know exactly who is in each scene, it creates a uniformity that lacks emotional punch. Expressions never change, body language is fixed. The one effort to shift the picture plane by showing two characters lying flat on a bed while the next page shows the fan they see on the ceiling feels awkward.

Every other page in the book is basically the same angle, parallel to the picture plane, like looking straight through a window. A book that uses visual media should take advantage of what that medium has to offer. The graphic novel uses images to tell the story as much as the words do. In Jacob's book the art presents the characters but nothing more. What the graphic format does offer is a way to present the book as series of conversations, as the title Good Talk promises. In that sense, it's effective. Some more inventive drawing could have made it even more so.

Still, as a long conversation with Z, this book offers wonderful questions and answers. And asking questions is important, more important than finding the answers. As Jacob says, “Because if you grow up to be the kind of person who asks questions about who you are, why things are the way they are, and what we can do to make them better, then you still have hope for the world.” This book offers a sweet ray of hope in a very confusing time.