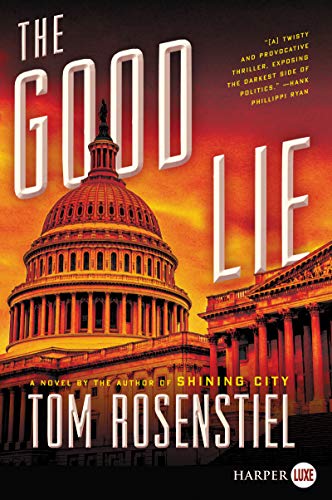 “The Good Lie feels like a rush job, written in haste to provide a sequel to the first novel in the series.”

The Good Lie attempts to address the biggest political problem of our times: the depressing partisan dysfunction in Congress and the White House. It would have been great if this were a thriller that exposes and decries the repulsive mess in Washington. But this book misses its target.

The Good Lie is the second novel in a series featuring Peter Rena, an ex-soldier and former Senate aide who heads a firm that specializes in political investigations.

In the opening chapters, the White House hires Rena’s firm to look into a terrorist attack on an American consulate in Africa. This national security fiasco seems intentionally similar to a real-life debacle, the 2012 assault by Islamic militants on the U.S. diplomatic compound in Benghazi, Libya.

The novel’s author, Tom Rosenstiel, is a longtime journalist who directs the American Press Institute, so one expects an insider’s view of how Washington really works. But the book’s plot doesn’t make sense. Why does President James Nash—a well-meaning Democrat out of central casting, “ruggedly handsome and gracefully athletic”—hire Rena’s firm instead of relying on government investigators to figure out what happened in Africa? It’s a very unlikely move, and impractical, too; Rena and his partners seem helpless and inept as they question the stonewalling officials in the president’s administration. The reader is led to believe that the bureaucrats and politicians are hiding a nefarious secret that would shake America to its core, but nothing particularly terrible is revealed in the end.

The Good Lie has loads of characters—senators, soldiers, cabinet members, journalists—but each is barely more than a name and a clichéd description. (The White House counsel has a face “that looks carved from granite.” A soldier has a body that looks “sculpted from marble.”) The narrative point of view shifts clumsily from one character to the next, often within the space of a conversation. Rena, the novel’s ostensible protagonist, is a blank, a dull automaton; his characterization falls short of even a two-dimensional portrait. The author gives him a cat and a long-distance girlfriend, but these tactics fail to flesh him out.

Worst of all, after the brief chapters describing the assault on the U.S. compound in Africa, nothing exciting happens in this book. Rena and the other characters spend hundreds of pages rehashing the attack, but the terrorists vanish from the plot and there’s no one equally interesting to take their place.

The novel focuses on several pathetic congressmen who grandstand in committee hearings and try to assign blame for the fiasco, but the book has no compelling villains. At one point in the narrative, Rena is told that shadowy figures are following him. One expects a crew of vicious mercenaries or assassins to come to DC to liven things up, but they never materialize. No one levels a pistol at Rena or takes a swing at him or even insults his manhood. That’s why he seems so dull: he has no worthy adversary to fight.

All in all, The Good Lie feels like a rush job, written in haste to provide a sequel to the first novel in the series.

Mark Alpert is a contributing editor at Scientific American and an internationally bestselling author of both adult and young adult science thrillers. His most recent novel is The Coming Storm: A Thriller (St. Martin's Press, 2019).