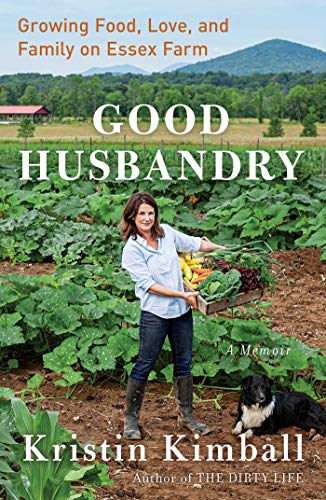 “not only informative and insightful; it’s also satisfying, entertaining, and makes you wish there were more farms like it where we can all get our food.”

This book about farming is terrific. Read it. Even if you’re not interested in farming.

The author wasn’t, either, until she met a visionary, fell in love, and left behind a location and lifestyle about as different from farming as you can get. Yet she made it her—their—life mission.

What’s additionally interesting about her reversal is the kind of “radical” farm they’re building. Most agriculture these days concentrates on a primary commercial crop. On the large scale, it’s industrial and feeds the bulk of the world; on the small scale, it’s either boutique farms serving specialty niches, or standard single-purpose enterprises like a dairy farm.

Rare is what used to be the norm: a family farm that supports itself with all foods, year-round.

Kristin and Mark Kimball’s Essex Farm in upstate New York not only supports itself but also feeds several hundred share-purchasing people by providing a full, wholesome diet from one source. In other words, they commercially practice the good husbandry of this memoir’s title, with husbandry meaning “the cultivation or production of plants and animals” (and, by extension, the care and nurturing of humans).

Their efforts include growing vegetables, fruits, herbs, milk-butter-cheese, meat, eggs, wool, maple syrup, hay, and grains—all produced as organically as possible, using draft animals instead of diesel power as much as possible. They practice sustainability that others just preach.

The work wasn’t too harsh when they first started the farm with their own labor. But as the demand for their products rose, they had to keep expanding their infrastructure to support it. This introduced complexities and expenses that outstripped their resources and put a tremendous strain on their marriage and bodies, especially after the children arrived.

Good Husbandry covers all of this in its joys and miseries, with brutally brave honesty and beautifully crafted prose. The memoir—a follow-up to Kimball’s first one, A Dirty Life—reads like a novel. The opening paragraph sets the tone:

“Some people say farming is the most wholesome job in the universe. I say having a farm is more like having a gambling problem. A farm is a living, breathing slot machine, doling out just enough reward at exactly the right moment to keep you coming back for more. Farmers are professional hopers, wafting supplication toward ancient gods we don’t believe in. We hope in order to ward off disease and accident; or for rain, but not too much; or no rain, but not for too long. If frost threatens early in the fall or late in the spring, we double down on hope, trying to generate it with the degree or two of heat that is the difference between death and another few weeks of life, between a good harvest and none at all. When we win those bets, it’s magic, like making something out of nothing. When we lose, the chips that get swept off the table can be measured in both love and money.”

The rest of the book drills down to the details. The story centers around one of the worst years the farm and family ever suffered, but it glides back and forth between past and present to form an enlightening narrative about the emotions, logistics, dreams, and realities of farming, “which is, in the end, a vigorous team sport.”

The strongest aspect of the book is how well it presents birth and death, which most of us don’t have to deal with directly. Growing and processing food is a hands-on, full-cycle experience (where “Waste from one part of the system became fuel for another”)—dramatically and often grotesquely different from purchasing and eating food from sanitized stores and packaging.

What food creators/processors and food consumers have in common is that it all costs money we have to somehow earn. If more consumers understood how precarious and risky and exhausting it is to produce food, we might better appreciate how privileged we are to be able to simply buy and eat it.

The other strong aspect of this book is its spirituality. No religious stuff, but self-examination and questioning of purpose and meaning to justify the effort, find the energy to continue it; and how people’s needs—individually and collectively—influence the lofty life mission constantly challenged by unrelenting truths. The natural forces we ignore or endure in cities and towns are the driving forces for those who depend on them in the country. The rest of us depend on them in turn.

While Kimball is making these points, she gives us anecdotes about family, parenthood, marriage, friendship, and work—all things that everyone, no matter what their walk in life, has to deal with every day.

By the end, it’s hard to not step back and evaluate your own lifestyle and choices and adjust perspective about them in a positive way. That’s what makes this book terrific. It’s not only informative and insightful; it’s also satisfying, entertaining, and makes you wish there were more farms like it where we can all get our food.

Maybe there will be, after more people read the Essex Farm story . . .