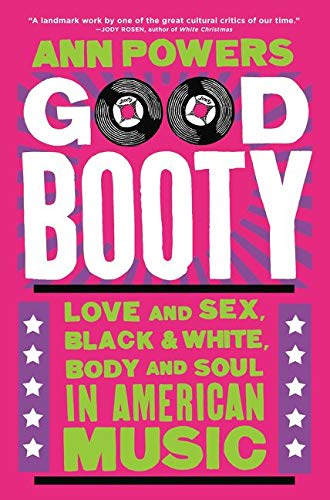 Ann Powers is one of music’s enduring rock critics, emerging on VH1’s “Behind the Music” in the late ’90s with a shock of orange hair, an ironic yet warm affect, everybody’s cozy hipster big sis. As NPR’s music critic and correspondent, now based in Nashville, she’s a living, breathing encyclopedia of pop styles, evident in her long-awaited Good Booty, which taps her erudition but comes up short in giving us a definitive story of rock-and-roll.

The book’s subtitle announces its primary preoccupations: love and sex, black and white, body and soul in America. She rarely strays from these twined (and twinned) themes, the arc to thread disparate artists and sounds.

Her early chapters set the stage in New Orleans, where various traditions wove together to create a distinctive American music rooted in the horrific history of slavery and, later, Jim Crow. Powers gums up some of this backstory with a distracting quasi-academic voice; but once she bites into the music, her singular insights glow on the page.

Her chapter on men’s quartets is worth the price of the hardcover, illuminating the cross-pollination that seeded a flowering of American music, as white and black musicians crossed racial lines for inspiration. She frames do-wop as a crucial generational bridge, how nonsense lyrics stirred a postwar, pre-60s generation of restless teenagers, perhaps captured best in Little Richard’s “Tutti Frutti”: Wop bop a loo bop a lop bop bop. The song originally rhymed “Tutti Frutti” with “good booty” (eventually changed to avoid controversy) and the verses about Sue and Daisy spelled out the omnisexual singer’s intentions. The genie of lust had escaped the bottle.

Powers is at her best when she explores the connections between emblematic artists. She sure loves her threesomes! In the ’50s it was the ménage à trois of Little Richard, Elvis Presley, and Buddy Holly, each adding a flavor of eroticism all his own. (She depicts an actual encounter when Holly stumbled into Little Richard’s dressing room and found him in flagrante with a young woman and joined in.)

But as Powers knows well, there’s a thin line between sexual and spiritual passion, and she fleshes out this idea beautifully in her chapter on gospel music: “Listen to another early Elvis song, the Jerry Leiber and Mike Stoller ballad ‘Love Me,’ and you can hear how the singer’s time with gospel quartets paid off in a way that led directly to rock and roll. . . . Every contradiction Elvis would tap into—‘rightness-wrongness, saved-lost, saint-sinner, white-black, straight-gay’—was in gospel at its most erotically charged. Faith was the element that resolved gospel’s disturbances. Downplay it, and you have clearer picture of the human condition that deeply informed early rock and roll: the feeling of being, as Elvis so eloquently put it, all shook up.”

Given the social upheaval associated with rock and roll in the 1960s, Powers trips lightly over seminal, sexualized figures—Jimi Hendrix, Janis Joplin, and Jim Morrison—and the problem with Good Booty’s structure gradually comes into relief: she views the landscape from 30,000 feet, allowing her to tick off the topography without offering a clear roadmap from, say, the Ronettes to the Rolling Stones to the arena superstars of the ’80s, Michael Jackson, Madonna, and Prince.

Her brilliance on the music, then, is watered down by encompassing too much and then squeezing it all into the boxes of sex and race. It’s a surprisingly un-sexy approach, leaving us yearning for a different focus – perhaps a trinity of artists or a more explicit feminist history. (Madonna alone would easily fill out a tome on the issues Powers covers.)

As Good Booty brings us into the 21st century, Powers’ admiration for a new generation of women re-grounds the narrative, as in her take on Beyoncé Knowles, clearly a goddess in her eyes: “It was Beyoncé who gradually evolved a way of being public in private that could serve as the ultimate guide to this new, volatile realm . . . Beyoncé often said that the most important quality she’d learned from the women who taught her to perform—the nuns at her grade school, and her mother, who was also her career mentor and costume designer— was discipline. Self-control allowed her to become free in performance while maintaining distance from that wild behavior offstage.”

Despite its unsatisfying narrative structure, Good Booty delivers all of the greatness of Ann Powers, her vivid prose and wisdom about musicians and ideas she’s brooded on for 30 years. Above all, she evokes the transcendence of musical and sexual release and the racial hurts that undergird the songs themselves. It’s no coincidence she dedicates her book to the legendary Robert Christgau and his wife—she’s proven herself a worthy heir in these pages.