Good Berry Bad Berry: Who's Edible, Who's Toxic, and How to Tell the Difference (Good...Bad) 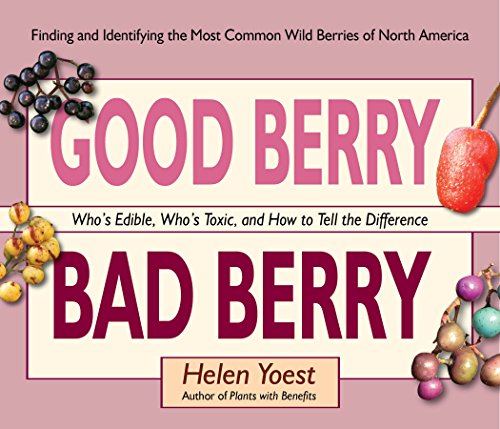 There’s food in them thar hills, and more and more people are enjoying the hunt for nature’s wild edible bounty. In the past, foraging skills and knowledge were passed from generation to generation among country people, but for most of us today it’s a new and exciting skill to be learned.

Helen Yoest’s Good Berry, Bad Berry is a field guide written to help North American readers distinguish between the delicious and nutritious good berry fruits growing both in captivity and in the wild, and the poisonous and/or toxic ones to be avoided.

The book features 40 of the most common wild berries of North America, including some imports such as the “good berries” Kousa dogwood (Cornus kousa) from Asia and goji berry (Lyceum barbarum), which comes to us from the Himalayas.

The book opens vertically, rather than from left to right. The top page has a brief summary of the plant with bold-faced categories such as plant type (such as evergreen shrub), berry (“poisonous, semi-fleshy, black drupe,” for example), symptoms if ingested, toxic principle (chemicals in the fruit that harm), severity, berry season, flower, leaf, and plant size.

The bottom page covers where the plant is native to, its habitat, hardiness, and a brief description. Both top and bottom page have a photograph of the plants either in flower or berry-laden.

Despite the binary (good versus bad) book title, Yoest acknowledges that some berries are safe to eat, but either are so unpleasant tasting they aren’t worth it, or require special preparation and/or a particular degree of ripeness to avoid toxicity. For example, the mayapple (Podophyllum peltatum) fruit, “must be completely ripened to eat safely. All parts of the plant are POISONOUS except for the very ripe fruit. The seeds are toxic.” Seven of these not-so-good fruits are listed under the Good Berry/Bad Idea section.

Written with lots of personal anecdotes, Good Berry, Bad Berry teaches on the Ligustrum page that the author’s own property is surrounded on two sides by a privacy hedge of Japanese privet (Ligustrum japonicum), planted exactly on the property line by the neighbors. “thus,” she explains, “we each have abut five feet of bush to deal with. The way I dealt with my side was to cut each bush at the base with a chainsaw and limb them up. I can still see the trunks of the shrub, but I gained a lot of real estate to garden in with plants that are edible.” Wistfully she says she wishes the privet plants were blueberries instead.

Regarding the highly invasive Autumn Olive (Eleagnus umbellate), which hales from East Asia, Yoest writes, “This is one plant, in good conscience, I could never recommend planting at home. Autumn olive is highly invasive in many areas. Yet, you can take advantage of this and do some environmental good by picking the berries along the trails and country fencerows. One less seed to escape into the wild, right?”

In the good berry section, you’ll discover myriad unexpected fruit that is edible and even delicious. Explaining about the North American native bayberries, also known as wax myrtle, Yoest tells us, “The berries are grown mostly for their famous bayberry candles. At home, though, I grind wax myrtle berries to use as a peppery spice, an idea I borrowed from the Native Americans.”

Yoest also offers ideas for different ways to use each edible fruit, such as jellies and jams, syrups, pies, or in the case of spicebush (Lindera benzoin) as a piquant spice. Of spicebush, she writes, “I grow it for butterflies and to use as a spice. The berries are ripe at the same time as apples, so I spice my homemade applesauce with ground spicebush berries for a little spicy kick.” In addition to being able to eat the fruit fresh, Yoest might have added that you can make a delicious, aromatic tea from the plant’s twigs and leaves.

The information included in the text is helpful and interesting, but so much space is given to the author’s personal stories, there is much is left unsaid that could have enhanced the book. For example Yoest mentions the Cornelian dogwood (Cornus mas) in passing, suggesting its sour taste when raw makes it suitable for syrups and preserves only. What she doesn’t say is the fruit of this pretty ornamental tree that is native to the Black Sea region can be used in a wide variety of dishes and concoctions such as a cranberry-like sauce, pies, marmalade, wines and liqueurs (in Azerbaijan and Armenia, the fruit is used for distilling vodka), and ice cream. As a bonus, Cornelian cherries have twice as much Vitamin C as an orange.

The book concludes with a four recipes: aronia jelly, beautyberry jelly, fresh mulberry tart, and goji berry and pumpkin seed biscotti, and a list of both good and bad berries that didn’t make it into the book, organized by regions in the country.

Spiral bound so the book can open flat, and printed on heavy matte-laminated paper, the water-resistant book is designed to be a durable, easy-to-carry reference to take with you on wilderness walks as well as garden strolls.