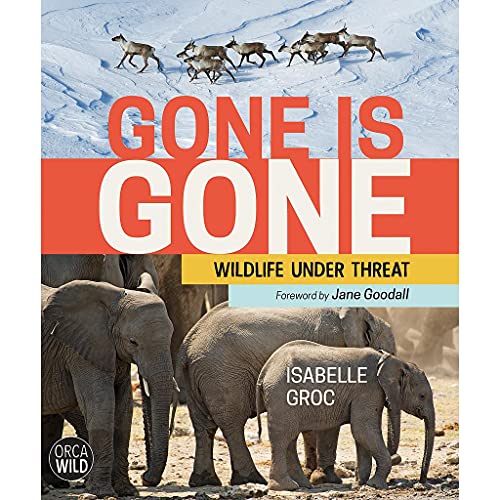 “Gone Is Gone is worthy of our attention because it covers the topic of species extinction in a far more comprehensive manner than so many other books for young people on this subject, which do little more than enumerate appealing species under threat. Recommended.”

We're in the middle of a mass extinction event. It's the sixth that we know of in our planet's history and the only one brought about by a single species—ourselves. But the bad news is also the good news because, since we're the cause, we could also be the solution—if we act in time.

Gone Is Gone opens with one such example, as author Isabelle Groc recalls a childhood memory of hearing that the blue whale was going extinct, and then recounts seeing one many years later. The survival of the blue whale, earth's largest living animal, was made possible by a public outcry that led, in the 1980s, to a world-wide ban on commercial whaling. (Unfortunately Japan and Norway have not signed on to this agreement and they continue to hunt whales.)

Species extinction is a daunting topic to write about. Those who care about wildlife are likely to feel discouraged by the many species we've already lost. Those who don't care aren't likely to read a book on this topic to begin with and yet they are the ones who most need convincing if we're to effect any change for the better.

Groc keeps our spirits up with examples of success stories where possible, but she doesn't disguise the fact that the overall outlook is bleak. “The Living Planet Index . . . indicates that the world-wide population of mammals, birds, fish, amphibians and reptiles declined by 60 percent between 1970 and 2014.”

The book is divided into four sections. Section 1 Wildlife Under Threat describes the magnitude of the problem. It includes an explanation of how the Red List assesses species at risk and a very useful chart that defines the various categories from extinct to species of least concern. The causes of species decline are given as habitat loss, pollution (including pesticides), climate change, wildlife for sale (hunting, over-fishing, poaching) and invasive species. The section concludes with descriptions of some of the better-known animals facing extinction.

Section 2 Understanding Endangered Species describes the challenges scientists face when trying to learn more about species they suspect are in decline. Such animals are usually few in number, and many live in inaccessible locations such as the ocean depths. It can be difficult to find them and, once found, even more difficult to determine why they're in decline.

In section 3 Saving Endangered Species Groc begins by asking “Why Save Species?” Though she covers the loss of pollinating insects as a potential threat to food security, the message that our own survival may be in jeopardy through ecosystem collapse is lost in a plethora of justifications for saving wildlife that will appeal only to those who don't need convincing in the first place. Perhaps her reticence is out of a concern for the sensibilities of the generation that is set to experience the worst repercussions of our seeming inability to grasp the magnitude of the problem.

Groc is not reticent, however, about pointing the finger squarely at Donald Trump for his disastrous policies with respect to wildlife and Canadian Prime Minister Stephen Harper for cutting funding to national parks. Kudos for that—young people must become informed voters if they wish to affect positive outcomes. The section concludes with examples of conservation efforts that have met with varying degrees of success.

Any author who tackles the subject of species extinction has to feel strongly about it. Yet Groc's writing style seem oddly dispassionate—perhaps because of an aversion to using apostrophes. It's not until section 4 Endangered Species in Your Backyard that we really feel her passion for the subject, especially when she tells us that any species extinction leaves her feeling “devastated.” This last section is the best, full of good suggestions on how the reader may work to benefit wildlife.

The main body of the text is interspersed with many first-hand accounts the author has had with wildlife. These personalize and enhance the book's content, but their somewhat arbitrary placement interrupts the narrative, sometimes for several pages, making it all too easy to lose the thread. One wishes these additions could be slotted between sections or subsections.

Groc is a wildlife photographer, filmmaker, and speaker on wildlife conservation issues. Her training is in photo-journalism and urban planning. While it's clear she draws on many first-hand experiences with wildlife, the book would have benefitted from editorial input from a biologist.

This is evident in the missed opportunities for biological insights that would expand the reader's understanding of, for example, why island species are more vulnerable to extinction or why loss of biodiversity—most especially the loss of keystone species—may lead to ecosystem collapse. Nor are we told what an ecosystem collapse looks like.

Unfamiliar words and expressions are highlighted throughout the text and explained in a glossary at the back. Aside from omitting to include important concepts like ecosystem collapse and ecosystem engineers it's an excellent glossary.

Despite some shortcomings, Gone Is Gone is worthy of our attention because it covers the topic of species extinction in a far more comprehensive manner than so many other books for young people on this subject, which do little more than enumerate appealing species under threat.