As Good as Gone: A Novel 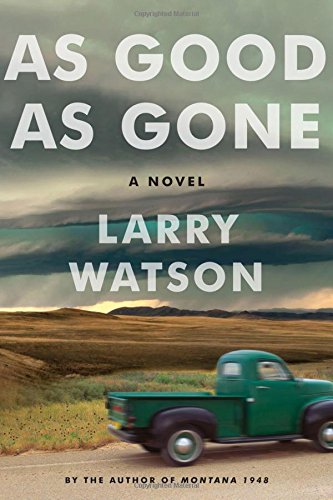 Calvin Sidey, who seems to breathe the mythos of the American cowboy, is almost a relic by the summer of 1963. This is when his estranged son, Bill, pulls up to Calvin's old trailer to ask his father for a favor. He wants Calvin to come back home to Gladstone, Montana, a place Calvin had fled years ago after an alleged murder he was rumored to have committed.

Calvin had been recently widowed then (his young wife Pauline died in a car accident while visiting her own parents in France) and, unable to handle his grief, he undertook some serious drinking as well as some serious violence, ultimately leaving his two young children behind. They would eventually be raised by Calvin's somber mother and sister. But now Calvin's son is back, asking his father if he can look after his own two children (Ann, 17, and Will, 11) while he takes his wife, Marjorie, to Missoula for an operation.

Calvin reluctantly agrees, and as Bill pulls away from his father's isolated trailer home, neither he nor the reader is quite sure whether “the son [is] asking the father for help, or [if] the son [is] trying to help the father.” But that seems to be the point, the main thread of this narrative, which keeps the reader entangled in this warm and heartfelt family drama.

The question of forgiveness and redemption also finds its way throughout the novel, and the reader can see Bill struggling to understand his father, to love him even, despite his own opinion that Calvin is “not worth it.” But Larry Watson's empathetic portrayal of this oft-misunderstood man hints that Calvin is worth it, despite his flaws. In some ways, this novel reads like a long paean for the lost art of chivalry, which Calvin exhibits, and to what Hemingway called living life with “grace under pressure,” which Calvin also embodies.

Additionally, the novel is written in present tense, which makes the leisurely pace of the story seem a bit more urgent; and the novel attains a quick, yet satisfying rhythm. Add to that the tension of a mysterious teenager who lurks outside of the Sideys's home while Calvin is in charge, evidently waiting for young Ann to emerge so he can “take a bite out of [her],” and the dramatic tensions really start to build. These scenes remind one of the terrifying short story by Joyce Carol Oates, “Where Are You Going, Where Have You Been?” in which the reader is introduced to Arnold Friend.

Yet unlike the unfortunate protagonist in Oates's tale, young Ann Sidey manages to mostly avoid her enigmatic stalker, but not without the help of her grandfather, who handles the situation with a masculine bravado of which Clint Eastwood would approve. It is in scenes such as these, violent as they are, that the reader can't help but be charmed by Calvin and his old-school ways: act first, ask questions later—a line of thinking and being that can quickly get one into trouble, as Watson later proves when Sidey confronts another family antagonist, Lonnie Black Pipe, this time with terrible (and terrifying) results.

But while Calvin Sidey's stoic nature and chivalrous attitude is undoubtedly charming at times, Watson takes this notion a bit too far when he has Sidey frequently reading (and musing upon) books by Catullus, Horace, Juvenal, Ovid, etc., still in their original Latin. Sidey would be more believable had the author chosen to keep his intellectual interests either implicit in the narrative, or better yet, not even suggested at all. It seems an overly romanticized attempt to portray the strong, sensitive type, which itself has been ground into the popular psyche like peppercorn. But this is a small, small fault in an otherwise remarkable novel.

As the concluding five chapters unfold, the pacing of As Good as Gone builds momentum from its once-leisurely rhythm. It is like watching the sunrises over the prairies of Montana about which Watson writes so eloquently. But as with the reward of the lavender- and golden-hued sky to come, the ultimate effect of this novel is well worth the time spent watching.