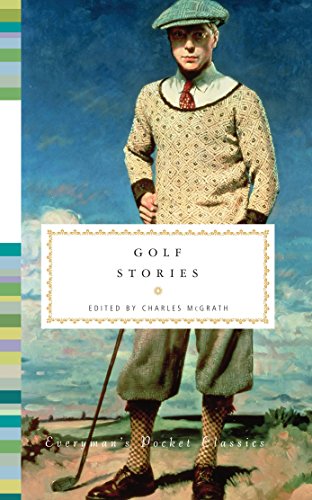 A golf course consists of 18 holes. Why? Because there are 18 shots in a bottle of Scotch whiskey, one per hole. So opening Charles McGrath’s anthology, Golf Stories, with its 18 tales was just the thing for a dreary weekend waiting for the weather to break and the greens to dry out.

Not just any 18 stories mind you, but 18 wonderful golf stories from 18 of the world’s best writers, including A. W. Tillinghast, F. Scott Fitzgerald, John Updike, and James Kaplan. There a few par-3s, a couple of tantalizing par-5s and doglegged par-4s to make this a fun course-read.

For those who play the game, you know golf is more than chasing a small white ball 6,625 yards in that Scottish park, the Old Course at St. Andrews. Golf is life and death, stretching across the roughs, bunkers, and OBs.

The first hole—story—is an easy right to left dogleg love story and the pursuit of personal perfection played on a lovely Scottish links course. P. G. Wodehouse’s “The Salvation of George Mackintosh” comes from when a 3-wood was still called a Spoon, a 5-iron a Mashie and the 9-iron a Niblick. It is the story of a shy man who learns the secrets of public speaking and can no longer keep his mouth shut, especially on the fairways. The twists and turns of this short story resemble the 1st at Bethpage Black, undulating, not quite straight and an occasional good laugh.

The stories travel from the shores of the Old Course to the New World’s visions of the Royal and Ancient Golf Club to The Masters. (Which is the same week as the release of this book. Imagine that.)

The shortest and most recognizable is Rick Reilly’s “Homer.” We all know this guy. We have played with him more than once. He thinks he can play golf, but if the summer Olympic games including golf club throwing and cussing, he would be the undisputed gold medalist.

Ring Lardner’s “Mr. Frisbie” is a mainstay of golf short story anthologies and is one of the longer par-4s of the book. It is a tale about trust and deceit, of a chauffeur/caddie who wants to write a column about his wealthy, but press-shy employer. For the reader, the hazards are the wonderfully written long uphill sentences without a hint of punctuation to rest. 56 words. 87 words. 129 words. With his grammar in question, the chauffeur’s time has not yet come. Lardner knew the game and created wonderful characters, making this story an easy par.

Ian Flemming’s James Bond’s inscrutable match with Goldfinger is followed by an easy par-3, “Harry Sprague meets the Masters” from the hands of Herbert Warren Wind. The fictional Sprague is on the PGA tour with the likes of Sam Snead and Arnold Palmer working his way to the 1960 U.S. Open at Cherry Hills C.G. in Denver. Three letters to his sponsor, complete with misspellings, errors in language and stories about others like Jack Nicholas that make you wonder and makes want to say, “Good luck, Mr. Sprague. I do hope you can beat Jack in the final round.”

The best par-3 in the book, McGrath’s own “Sneaking On,” is about a town we all love for its name alone, Valhalla, New York. OK, the biggest green zones in this town of Valhalla are the two cemeteries, but the idea of golfing across town is, well, tantalizing. Definitely, Mark Twain was wrong about golf, the walk in the park is why we play the game. By the way, you cannot golf across Louisville KY starting on the 6th at the real Valhalla.

Another example of letter writing is John Marquand’s “Caddie Crisis,” a short par-4 extraordinaire. There is a crisis in the caddie shack and Board member Roger Horlick has written a letter to Happy Knoll Country Club president Albert Magill. More accurately it is the caddie shack that is in crisis. And with all of the additions and improvements Mr. Magill has made to the caddie shack, indoor plumbing, easy chairs and magazines, even with “Old Ned” eventually adding gambling machines, the boys are leaving for other clubs.

This is a letter of rumors, complaints, excuses, club pride and an absolute fear of the possibility of members pulling their own golf carts. A harrowing thought, to say the least, for caddies are an absolute part of the game. It ends with a possible solution, an idea whose time had come. But is Horlick’s stroke good enough to hole the ball?

The final story, “The Mower,” like so many final holes, is short, sweet and hard to forget. James Kaplan’s contribution is not about a golfer, but the lovelorn guy on the grounds mowing crew—the one every golfer loves for his work and hates for the noise—a lady jogger, and an OCD groundskeeper. Like a lot of final holes, the story’s ending in not as happy as one would hope but still leaves you with a smile.

I think I will go to the driving range later and tonight reread a few stories. Maybe starting with Stephen Leacock’s “The Golfomatic,” accompanied by a bottle of Scotch whiskey and my clubs in the corner.