The Golden Tresses of the Dead: A Flavia de Luce Novel 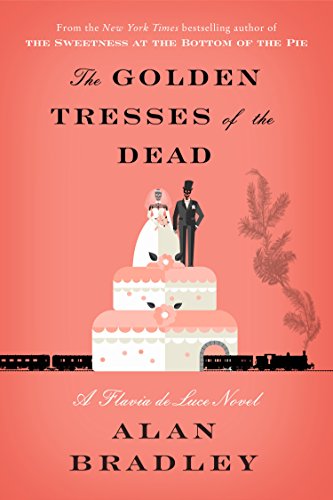 “It’s a foregone conclusion that adults picking up The Golden Tresses of the Dead are sneakily opening up the book on their own, under the covers at night.”

Flavia de Luce is insatiably curious about science, especially chemistry, and in her exquisitely uncomfortable British home where half her family’s dead and the other half make fun of her, no wonder she turns to detection instead.

In this tenth in Allan Bradley’s irresistible series, Flavia faces a new loss: Her sister Feely (for Ophelia), who maybe sometimes likes her, gets married in a gorgeous ceremony and is about to depart on a honeymoon trip. Just as Flavia begins to realize what a loss this will be, distraction erupts with Feely’s horrified discovery of a severed human finger in the wedding cake.

It’s the best possible distraction for Flavia, though. Once Feely leaves, Flavia digs into investigating the finger’s origin—and of course the purpose of being in the wedding cake—with the one person she can trust in her home: Dogger, long ago rescued in wartime by Flavia’s father, and now Flavia’s own partner in discrete investigations. Picture it: Arthur W. Dogger & Associates. Maybe being an “associate” will keep Flavia from getting into more trouble with the local constabulary.

In many other books featuring adolescent protagonists, dead bodies would be something to avoid. The Golden Tresses of the Dead (the line is from a Shakespeare sonnet) refers, of course, to those stinky, decomposing corpses. For Flavia, they are a source of fascination, with their parts and their processes. (She does have some dreadful moments when she sees them as human, but not often.) With Dogger, she now has reason to visit cemeteries, probe the processes of embalming and bleeding out, and test for various poisons.

Bradley can’t keep Flavia endlessly young, which is starting to strain the series a bit. Flavia suspects her newly emotional self as having “glandular” issues, grapples with odd feelings about the bodies and smiles of young men, and can’t get away with excusing her adventures as “childish.”

On the other hand, her growing knowledge of chemical reactions opens fresh insight for her in solving crimes:

“Someone had put the ordeal beans of Calabar into Mrs. Prill’s coffee maker.

“I couldn’t wait to tell Dogger.

“It was too late tonight. He needed his rest. And so, to think of it, did I.

“I switched off the lights and went back to my bedroom. I sat on the edge of my bed reviewing the events of a hectic day.

“But even before I reached the London Necropolis Railway, sleep fell on my head like a sackful of anvils, and I did not move until morning.”

What wakes Flavia from this impressive torpor is the loud and slightly malicious teasing of her unwanted younger cousin, Undine. Although Flavia dislikes the loud-mouthed “little swine,” Undine’s insistence on being heard awakens another “glandular” emotion in Flavia: compassion for this child who’s competing for Flavia’s position in the family, and in the investigation.

When Bradley sees Flavia through to the closing of two cases at once, he leaves a door open to the next book in the series—which, almost surely, will aim Undine and Flavia on a collision course with the next murder.

Purchase the book ostensibly for the “young person” in your life, if you like; it’s a foregone conclusion that adults picking up The Golden Tresses of the Dead are sneakily opening up the book on their own, under the covers at night.