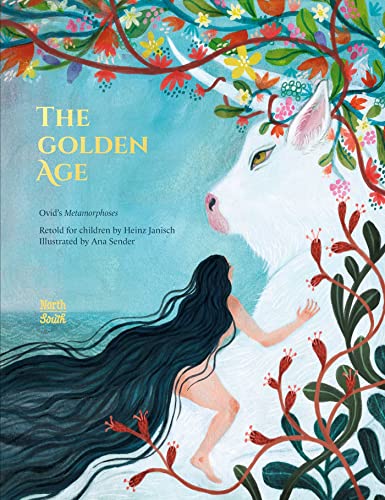 “These may be fantasy and fable, but the ability that humans have to create change, to endure change, to grow from change is as practical as ever.”

Ovid (c 43 BCE–17 CE) was a well-respected Roman poet who wrote over 250 stories in his day. These stories are assembled in a 15-book body of work known as Ovid’s Metamorphoses. In The Golden Age, Janisch has selected 17 stories from Ovid’s writings to retell for children in order to “arouse interest in this wonderful, wide-ranging collection.”

Some of the stories (The Blue Ball, Flowers and Swords, Fish in the Trees, etc.) parallel the stories in the book of Genesis in the Bible. They tell of the origin of humans and the planet, the seasons and natural resources, and the wrath of the gods that brought about great floods. These early chapters introduce the whims of myth and mystery as the playthings of the gods, who are responsible for the Golden Age of humankind on planet Earth.

At first the god of the beginning has no name other than that: god of the beginning. By chapter three, Jupiter, the King of Gods, takes a name. The rest of the stories/chapters relay the antics of various gods, their children, and all of their interactions with the humans the gods created. Love, rage, jealousy, greed—all the emotions are in full force as these dramas and tragedies play out.

The Laurel Tree tells the tale of Daphne, the nymph who was hit by Amor’s lead arrow—which made her run away from love, and Apollo, the boastful son of Jupiter, who was hit by the love arrow—which made Apollo pursue Daphne. Daphne was so fed up with the chase that she asked the river gods to help her and they obliged by transforming her into a laurel tree.

The Contest is the story of Arachne. Arachne was a fabulous weaver, the best in all the land. Minerva, the goddess of art, was jealous of Arachne. The two weaved a challenge of artistry and technical skills and Arachne won. She may have won the contest, but Minerva was so angry she turned Arachne into a spider, so her weaving would be confined to webs.

The Rustling of Leaves brings together Philemon and Baucis who are eternally intertwined as an oak tree and a lemon tree. Their kindness to strangers earned them a long life as honorable protectorates of a beautiful temple, two loves together forever, strong and rooted.

The other stories follow a similar vein. As Janisch points out in his commentary for the collection, these are all stories of transformation. Of course, that is what a metamorphosis is. These may be fantasy and fable, but the ability that humans have to create change, to endure change, to grow from change is as practical as ever. Each story is really a glimpse into change.

Sender, for her artistic contribution, lends a light and gentle touch with her illustrations. Her subdued color palette, mastery of facial expressions, and control of movement make her drawing style come alive. If at first the illustrations seem simplistic, look again. Really look at how the scenes she creates impacts the written text, and suddenly the drawings will take on a deeper significance.

The Golden Age is an introductory view into Ovid’s world of Roman/Greek mythology. It can serve as a first reference book for this type of material similar to what Hans Christian Andersen or Grimms’ Fairy Tales collections might be.