The Goddess of Vengeance 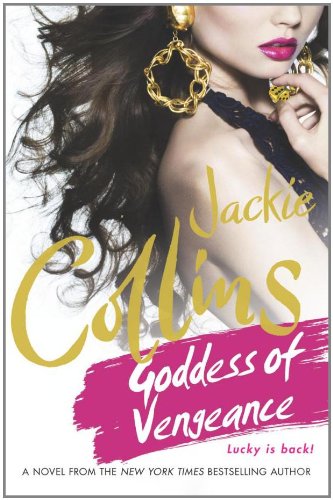 “But, oh, there is fun to be had in The Goddess of Vengeance. Fun aplenty. . . . No one will ever accuse Jackie Collins of writing literature. . . . yet, when it comes to the simple pleasures of a page-turner—the sort of thing that one seeks out during the fever stage of the flu—there is nothing better.”

Like unemployment insurance in times of economic crisis, it is good to know that Jackie Collins is always there with a new novel when you need her. In this case, it is The Goddess of Vengeance, a particularly nifty title for an author who knows a thing or two about her topic. This is, from all reports, her 28th novel. And with 27 bestsellers to her credit so far, expectations are running rather high.

With The Goddess of Vengeance (which, admittedly, sounds like the title of a B-picture filmed in glorious Technicolor, starring Maria Montez) returns to the adventures of Lucky Santangelo, a heroine she has written about often enough heretofore that the publicity packet refers to her as “Collins’ most beloved and iconic heroine.” But then again, the same material also promises “a novel full of power, passion, revenge, and raging family dynamics.”

And it was those “raging family dynamics” that the reader, on opening the book, particularly yearned for.

But while much is as it always has been in Ms. Collins’ Land of the Lost that is Hollywood—cheating husbands, obsessive and crazy people, and the “champagne dreams and caviar wishes” that Robin Leach seems to have left Jackie Collins upon retiring to his Twitter feed—there are changes afoot in the new novel.

For one thing, the action has shifted from L.A. to Los Vegas—Lucky has given up running her beloved Panther Studios in order to own “the luxurious hotel, casino, and apartment complex The Keys in Los Vegas”—something that at once seems normal enough and completely disconcerting. After all, having left Rodeo Drive behind, where will we shop?

There is something in a Sunday afternoon that yearns for Jackie Collins, especially as the summer sun’s heat begins to mix with the autumn’s chill. There is something inside that seeks the silicon characters, the repetitive plots, the comfort of stories mixing Hollywood and the mob.

Who else, after all, (excepting perhaps Anne Rice, but then they are all vampires and witches) names characters “Harlan” and “Armand” and Annabelle Maestro, with an apparent straight face? Who else names someone “Lucious”—a “strung-out exotic dancer” who was once “the prettiest girl in high school in spite of a pronounced overbite”? Who else gives you a character named Peggy (Armand’s mother!), who dreams of “sex with Joe Piscarelli” from her perch as a Manhattan society doyenne? And who else names the dog Amy Winehouse, and then does not change that name when circumstances in the real world would seem to dictate that one should?

Not since Charles Dickens gave up the ghost of Christmas Yet to Come has there been a novelist who so crams his or her novels with so many characters and who tells so very much about each character just by naming them.

Reading Jackie Collins’ novels (something that this reader must, in all candor, both admit to have done rather repeatedly, and then admit to having stopped, somewhere back in the late 1980s, when one character too many crossed the country, leaving a pile of corpses in his wake, as s/he sought the identity of his birth mother, who was now a top actress or agent or something glamorous out in Hollywood) is like nothing so much as it is like returning to “All My Children” once you hear that it has been cancelled and finding that Susan Lucci still shakes her head from side to side when she means, “no,” “yes,” or “I love you.” Some things never change.

But, oh, there is fun to be had in The Goddess of Vengeance. Fun aplenty. Chorus girls get snapped up by Arab princes. Venus, the sex-driven singer/actress/best friend of Lucky raises a perfectly-arched eyebrow. And Cookie, oh, Cookie…

There are DNA tests to be hurried along. There are hotel/casinos/apartment complexes to try to buy from a forced sell. And there is Seducta (no kidding), who is “standing in front of Armand and Annabelle like a dumb sack of shit, gazing longingly at the mounds of coke.”

No one will ever accuse Jackie Collins of writing literature. “Finalist for the National Book Award” will likely never be a part of her author’s bio. And yet, when it comes to the simple pleasures of a page-turner—the sort of thing that one seeks out during the fever stage of the flu—there is nothing better.

And The Goddess of Vengeance represents not only the latest Jackie Collins novel, but, as noted above, something of a departure. Maybe it’s Vegas, baby, but Vengeance seems to bring out the best in her. In The Goddess of Vengeance, Jackie Collins has managed to retain all that has placed her on the top of the heap (400,000,000 books sold, to date), while actually finding new and more entertainingly baroque plotlines.

By chapter 64, when our author begins tying up all of her many, many plot threads, and revealing the (for now) final fates of her multitude of characters (so many that, were a film made, it would have to use CGI to flesh out the crowd shots), the reader finds himself racing for the end. After all, the reader needs to know: Will Lucky still be living up to her name by the novel’s last page?