God Is Not a Christian: And Other Provocations 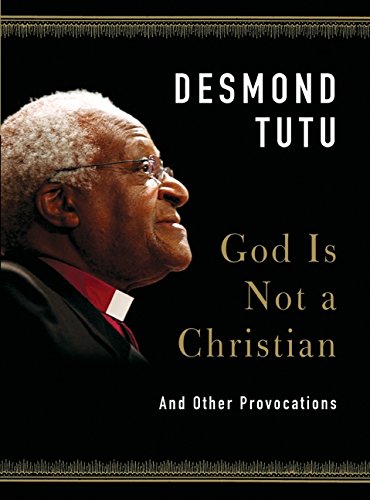 When people meet a man or woman of spirit, peace or national leadership, the reaction is almost always the same; there is an aura about these men and women that exudes power, confidence and leadership. I have not had the honor of sitting in the presence of Archbishop Desmond Tutu, but believe he, too, meets this criterion. So when I had the opportunity to review a collection of his speeches and letters, I jumped at it.

The title—God Is Not a Christian—is intriguing. The Archbishop is as great of a humanist as he was a great leader of the Anglican Church, both before and after his retirement. Reading the title and the summary of the book, one is led to believe that it concerns world affairs, religious and racial tolerance, and the nonviolent protests initiated by Henry David Thoreau in Walden and carried forward by other religious leaders as Mahatmas Gandhi and Martin Luther King, Jr.

Editor John Allen makes this a story about South Africa, religion, apartheid, and tolerance. There are three sections that meet the expectations of the title. The first connects directly.

“That Christians do not have a monopoly of God is an almost trite observation,” said Bishop Tutu in a 1992 eulogy for his friend, the Catholic archbishop of Cape Town Steven Naidoo. Archbishop Tutu questioned the idea that it was only through Jesus Christ that one would find sanctuary with God. “We would have to dismiss as delusion and vanity the profound religious and ethical truths by . . .” the great leaders of the nonChristian faiths—a belief shared by Archbishop Naidoo.

Archbishop Tutu also bucked the tide of the conservative Anglican Church with his humanist stance concerning gays and lesbians. In Southwick Cathedral, London, he proclaimed that if he had one wish it would be “for the world to end the persecution of people because of their sexual orientation and hold them in thrall.” Here his love for the sanctity mankind and for human rights shines.

Finally comes Archbishop Tutu’s anguish over the plight of the Palestinians and the Israeli occupation. In a few words, he makes the distinction between the people of Israel and the government. From temples in New York City to the Western Wall in Jerusalem, his message remained the same: “It is because I am a black South African, and if you change names, the description of what is happening in the Gaza Strip and the West Bank could be a description of what is happening in South Africa.”

However, the Archbishop always refers back to the plight of the South African blacks and apartheid, to his religion and belief that his God is a god of tolerance and peace and understanding. This results in the collection reading more as a sermon from a leader of a great church and a great people. This is not a discussion of Archbishop Tutu’s role in the anti-apartheid movement as much as it is a discussion on how his faith in God and in mankind helped shape the lives of millions in the African continent and his South Africa.

There are two working subtitles to this book. The copy reviewed showed “Speaking Truth in Times of Crisis.” The second, and the one most likely on the final printing, is “And Other Provocations.” Sometimes the truth is harder to understand and accept than the irritants they are meant to cure. The scripts provided in this title move more toward the former, for Archbishop Tutu never sees the crisis as simply irritants, but as the great struggle for freedom, equality, and self-determination.