Go Fish: How to Win Contempt and Influence People 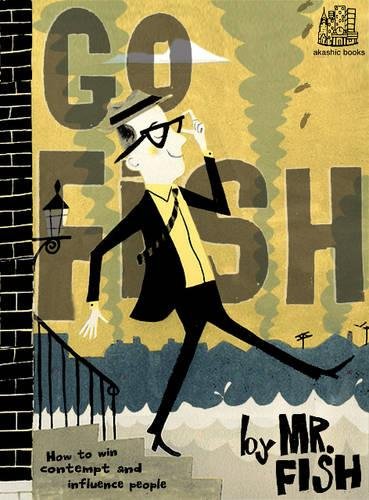 “I thought I was getting a picture book of politically incorrect satirical cartoons to review. What I got was an evening of wonderment, thought, confusion, discovery, and a deep appreciation of a really deeply disturbed and brilliant journalist, cartoonist, and satirist.”

As far as reading goes, I am dyslexic. Kind of ironic for a book reviewer, huh? I read slowly and deliberately, sometimes taking two-weeks to read what my wife devours in two days. So to tell you that I finished Go Fish in a single evening says a lot about Mr. Fish/Dwayne Booth and his thoughts on life, politics—and everything in between.

Do not pick up this book if you think it is simply a picture book filled with satirical cartoons attacking government stupidity, political incompetence, and capitalistic lack of sensitivity. This book is far more—though the reader will not really know whose thoughts it represents: those of Dwayne Booth or his alter ego, Mr. Fish.

Go Fish is one of the most complete collections of extraordinarily long and grammatically correct sentences you will ever tackle—aside from Friedrich Nietzsche’s of course.

It is also a collection of extraordinary artistic work with pen and ink by Mr. Booth. From montages to cartoon characters, each page will bring a sense of wonder and the question: Is this really all from one man’s hand and mind? No wonder Mr. Booth has to work with Mr. Fish to complete this wondrous project.

Equally as amazing is the scope of knowledge possessed by this dangerous duo, which is evident on the very first pages, which contain a self-portrait (deciding on what disease he would be when he grows up) to a wonderful pen and ink reproduction of Winston Churchill all the while correctly quoting the great man’s 1937 speech to the Peel Commission in England, plus a political stab at George W. Bush.

This is not so much an autobiographical writing of either persona, but a stream of thought that seems to merrily wonder off track and somehow finds its way back. Mr. Fish is enamored with Elizabeth Kübler-Ross’s five levels of grief, as defined in her seminal work, On Death and Dying; however, Mr. Fish believes that for those who believe that their life’s mission is to “clobber disaster before it happens,” thus Kübler-Ross’s five main chapters must be reversed: Acceptance, Depression, Bargaining, Anger, and Denial.

One does need to have a strong sense of humor while exploring the pages of commentary and pictured satire. Subjects range from Mr. Fish’s shooting of his own finger to the discovery that vaginas are real and not something hidden behind Teddy Bears, hands, and other objects in Playboy magazines. His satirical drawings target religion, politics, and life in general. If you possess a sense of irony and humor you will laugh aloud, giggling softly and scratching your head trying to figure out the joke. If you can’t, boy, will you be pissed off.

Each of the chapters is filled with cartoons from this “editorial cartoonist,” for Mr. Fish (or is it Mr. Booth?) believes that he and his colleagues are really practicing a not so rare form of journalism. He defines the editorial cartoonist/journalist as, “nothing more than polite hecklers of despicable men whose faults are glaring enough to serve journalism’s shorthand; that is, whose faults are so obvious that they provide a point of fact that allows the raison d’être of the cartoon to make sense to as many people as possible.”

And that is only half of the sentence. And yes, I had to look up raison d’être.

In all honesty, I thought I was getting a picture book of politically incorrect satirical cartoons to review. What I got was an evening of wonderment, thought, confusion, discovery, and a deep appreciation of a really deeply disturbed and brilliant journalist, cartoonist, and satirist.