Glow Kids: How Screen Addiction Is Hijacking Our Kids-and How to Break the Trance 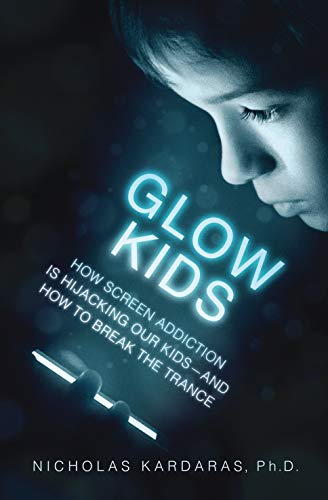 At times, the most difficult but important books to read are the ones that hold a mirror to our lives and parenting behaviors. Glow Kids by Nicholas Karadaras is just such a book. The author, an experienced addictionologist, has written a readable and at times alarming book about the potential dangers to kids of screen time, whether it be from a tablet, a mobile phone, or a desktop computer.

The book documents how the digital age affects neurochemistry and brains, particularly those of vulnerable young children. While the benefits of mobile technology and the Internet are almost universally espoused, the author warns that we have not fully appreciated the significant dangers.

Almost all of us have seen a schoolroom, a restaurant, or airplane passengers with everyone’s faces glued to their glowing screens. Kids between 8 and 18 are estimated to spend 7.5 hours a day in front of a screen, which does not count the additional 1.5 hours texting and talking on cell phone. According to the maker, just one first-person shooter game, Call of Duty has been played for 25 billion total hours, which adds up to 2.85 million years—longer than the course of human existence!

Glow Kids amply and convincingly documents the potential connections between screen time and a number of mental health conditions including depression, ADHD, aggression, and even psychosis.

Reading between the lines the author suspects that our obsession with electronic devices can at least partially cause these various disorders. He does however keep open the option that persons with the disorders from other causes (e.g. genetics, drug and alcohol abuse, gangs, non-supportive family environments) may have their condition worsened by extensive screen time.

If nothing else, the text supports the concept that excessive screen time and mental disorders go hand-in-hand. Symptoms emerge, school performance suffers, appropriate face-to-face social interaction decreases, and young adults often turn away from more healthful pursuits such as sports, music, the arts, and interacting with nature.

Unhappy children can especially find solace and intriguing enjoyment in the mythological and fantasy world of computers, heroes and player superpowers at the click of a mouse. For them it is much easier to mouse click than to deal with the effects of social awkwardness, bullying, an unhappy home life, or few friends

Parental observation and restriction of the amount of screen time is certainly important, however screens are virtually everywhere. School districts are often engaged in a race to computerize classrooms and learning, although the evidence does not support that this is always beneficial.

In some cases, for individuals who are already “addicted” from extensive use of electronic devices at home, their behaviors are worsened by well-intentioned educators. The text quotes several specialists in this area who assert the bidirectional influence of gaming/Internet addiction to child psychopathology– vulnerable brains are more sensitive to screen addiction; the addiction contributes to psychiatric pathology, which worsens the addiction. Of most concern to all of us are the headline grabbing young adults who have committed violent or aggressive acts fueled at least in part by excessive exposure to violent computer games and images.

The “solutions” chapter is short but clear and direct—

• Be knowledgeable parents who set screen limits when necessary at home

• Use professional help when signs of an addiction appear

Technology advocates tout the “tech-as-tool” benefits such as faster reaction time, improved hand/eye coordination, access to almost unlimited information, and keeping children safe from a variety of dangers outside the home by staying indoors on the computer. Prior to this book though, there has been relatively little concise information about the dangers of what we give up for what we get. In addition to the neurochemical changes associated with Internet addiction, as adults and parents we must look at our own behavior.

Somewhat chagrined, I found myself finishing several chapters of the book and then immediately going to my iPad to check the latest news and email. Although most of the examples of computer game addiction are limited to teenagers and young adults, screen time has become an all-too-common part of 21st century life. We model and emphasize the acceptability of extensive time in front of a computer screen to our children. Adults too risk what Henry David Thoreau called “becoming tools of our tools.”

Every parent and teacher and those who work with youth should read this book to be informed about the downside of what many of us have seen as a tremendous advancement in civilization.