The Glass Ocean: A Novel 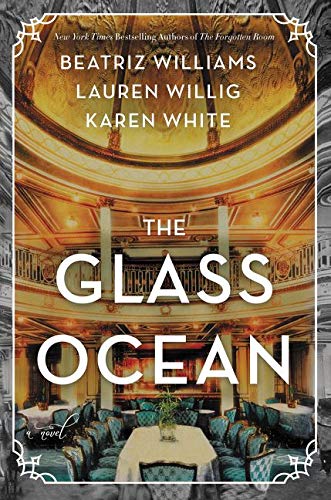 The Glass Ocean, an ambitious project written by three New York Times bestselling authors is a work of historical fiction mixed with a huge mystery at its core and a couple of romances whose passion is expressed in two different centuries.

The story crosses the Atlantic Ocean and spans a century with intrigue and clues unearthed almost a hundred years apart, about the sinking of the Lusitania and the lives of half a dozen passengers on board.

The telling begins in 2013 with Sarah Blake, a bestselling New York Times author at a stalemate after the furor of her wildly successful debut novel. In a scene many authors can relate to, Sarah is invited to a book club meeting without her publicist and arrives late. Her hosts are all quite loose with white wine and not really listening to their famous guest of honor. Instead, they erupt into bursts of giggles over finding an online site where they were able to get Sarah’s novel for almost nothing. When Sarah walks out the door, cut low by the clueless disrespect of her hosts, the reader is firmly in her camp.

But she has run through the money from her first novel and needs to prop up her Alzheimer-afflicted mother about to be evicted from a care home. It’s enough motivation for Sarah to open a forbidden family chest with her great-grandfather’s last belongings – taken off his body when they pulled him from the waters around the sinking Lusitania, torpedoed by the Germans in 1915 on its way from New York to Great Britain. Sarah finds a note, somehow preserved on the back of a first-class luncheon menu, which begins the mystery: “No more betrayals. Meet me B-deck prom starboard side.”

Sarah launches herself on a mission to discover and to tell the full story of that mysterious note and the tragic journey of the ocean liner. She has plans for it to be the inspiration of her 2nd novel—the story is big enough to change history—and snatch her from the jaws of imminent bankruptcy. The reader delights in the opulent journey of an ocean liner on a doomed voyage. The questions are everywhere, beginning with does anyone survive? Then, when we learn there are survivors, Who will live and who will perish?

The book is divided into three points of view. Caroline Hochstetter, an elegant Southern Belle, married to and in love with Gilbert, a super-rich industrialist; Tess Fairweather, a fraudulent opportunist reluctantly trying to carry out her last sting; and Sarah, our modern author on the lookout for the story of her career.

As each chapter tells from the POV of each of these three characters, the reader quickly understands there is a plot afoot on the Lusitania, and all the characters we meet onboard, from the maid to the chief steward, to the two sisters plotting together seem to be somehow involved. Hints of treason, mention of Germans spies captured on the ship, a rare, handwritten Strauss waltz with scribblings in German, and a few misrepresented identities. And, between all the sleuthing across a century, a couple of romances begin to bloom.

To the reader, the clues are discovered in both centuries—1915 and 2013—in New York and London as we step into the private luxury suites on the Lusitania,  the coffee shops of London, and a deserted family estate in British countryside. Through Caroline Hochstetter we dance in the arms of a romantic suitor named Robert Langford, who happens to be a key player in the intrigue and illicit romance on the ship. Through Sarah Blake in 2013, we meet the tall, handsome John Langford, a disgraced member of Parliament and the grandson of Robert Langford. Both Sarah and John are conveniently at a crossroads in their lives and ripe for romance.

Through John, Sarah gets an opportunity to look through Langford family archives, and bit by bit, details emerge. It’s intriguing how all the clues are revealed, sometimes through the action on the Lusitania, sometimes from a scrap of paper discovered almost a hundred years later. The reader is kept guessing and doesn’t learn who survives the voyage until we’re in the midst of the spectacular, disastrous sinking.

How three writers were able to orchestrate the mystery, intrigue and historic tale is quite a wonder to ponder, and ultimately, very much worth the read. Entertaining, intriguing, educational, and satisfying.