Give Me Liberty: A History of America's Exceptional Idea 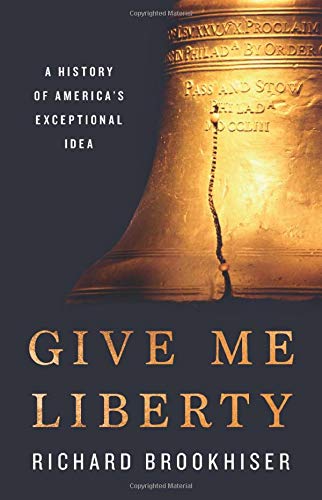 “National Review Senior Editor Richard Brookhiser has written a thoughtful and elegant meditation on the American idea of liberty . . .”

National Review Senior Editor Richard Brookhiser has written a thoughtful and elegant meditation on the American idea of liberty based on 13 documents that, in his words, “represent snapshots from the album of our long marriage to liberty.”

Brookhiser begins his historical-intellectual journey with the Minutes of the Jamestown General Assembly in 1619, which he calls the beginning of self-rule in America. The assembly formed committees, examined the credentials of one of its members, set prices on tobacco, and enacted laws against gambling, drunkenness, idleness, and provoking Indians. But the assembly’s importance to the idea of liberty was its existence as a representative body, which evolved into the Virginia House of Burgesses.

The author next traces the origins of religious liberty in the United States to the long forgotten Flushing Remonstrance. Written in New Amsterdam (which later became New York) in 1657, the Flushing Remonstrance defended the rights of Quakers to practice their religion. Its language, however, was broader: it advocated “free libertie of conscience according to the costome and manner of Holland, without molestation or disturbance from any Magistrate . . . or any other Ecclesiasticall Minister.” Religious liberty, Brookhiser writes, eventually “became the norm, then the rule, for [Flushing], and for [the] country.”

The seditious libel trial of John Peter Zenger in 1735 for publishing in the Weekly Journal attacks on the administration of New York Governor William Cosby upheld the liberty of expression and a free press. Zenger’s lawyer, Andrew Hamilton of Philadelphia, brilliantly portrayed Zenger’s cause as “the cause of liberty.” Free citizens and a free press, Hamilton told the jury, are essential tools for “exposing and opposing arbitrary power.” Brookhiser notes that Gouverneur Morris later called the Zenger verdict “’the morning star’ of liberty in America.”

Brookhiser calls the Declaration of Independence “an essay on liberty.” The notion of “inalienable rights” “endowed by” our Creator meant that human liberty preceded government, and that government’s primary purpose is to secure that liberty. That is why the U.S. Constitution mentions very few “rights.” The Constitution did not create rights. It established a governmental structure designed to secure our “inalienable” rights.

Even the “Bill of Rights”—the first 10 Amendments to the Constitution—are prohibitions against government infringement of those inalienable rights.

It took a destructive civil war to begin the process of extending liberty to African Americans. Brookhiser believes that Lincoln’s Gettysburg Address “registered . . . in the American mind” the idea that liberty was for all Americans—white and black. Nearly 80 years before the Gettysburg Address, antislavery seeds were planted when a group of New Yorkers formed a “Society for Promoting the Manumission of Slaves, and Protecting such of them as have been or may be Liberated.”

In 1848, Brookhiser notes, 68 women, led by Elizabeth Cady Stanton, and 32 men signed a Declaration of Sentiments at the Seneca Falls convention in an effort to include women in the promise of the Declaration of Independence. Twenty-two years later, western territories and states approved women’s suffrage. The 19th Amendment to the Constitution, which was ratified in August 1920, extended the vote to all adult women.

Brookhiser includes in his meditation on liberty the words written at the base of the Statue of Liberty (“Give me your tired, your poor, your huddled masses yearning to breathe free . . .”), William Jennings Bryan’s famous “Cross of Gold” speech (which is less about liberty and more about economic equality), the Monroe Doctrine (which was about geopolitics not liberty), Franklin D. Roosevelt’s “arsenal of democracy” fireside chat, and Ronald Reagan’s “tear down this wall” speech.

Liberty, Brookhiser seems to be saying, is not meant just for Americans. The Statue of Liberty invites others to partake in America’s freedom. FDR’s “arsenal of democracy” pledged the United States to assist free nations under attack by expansionist dictatorships. Reagan’s speech at the Brandenburg Gate invited Soviet leaders to allow the peoples of their East European satellite empire to enjoy liberty.

This extension of the idea of liberty beyond our shores raises important questions that Brookhiser does not answer. Should the United States actively promote liberty abroad? If so, to what extent? Isn’t that what we tried to do in Afghanistan and Iraq, with rather dismal results?

The Declaration of Independence proclaimed that “all men are created equal,” not just Americans. All human beings “are endowed by their Creator with . . . inalienable rights.” Does the American idea of liberty mean that we must attempt to export it whenever possible?

Or, should the United States hew to the counsel of John Quincy Adams who as Secretary of State on the 45th anniversary of the Declaration of Independence asserted that America is “the well-wisher to the freedom and independence of all,” but is “the champion and vindicator only of her own”?