Giuliani: The Rise and Tragic Fall of America's Mayor 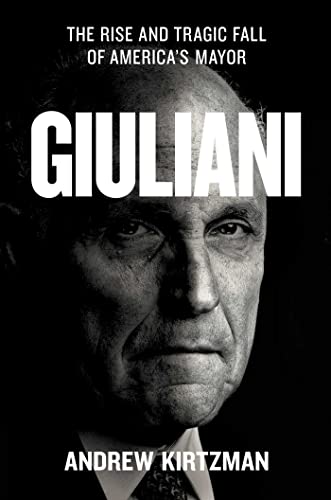 “Giuliani is a well-written, balanced, and unvarnished portrait of a public figure whose downfall will sadden most readers.”

The bright only child of Italian American parents, Rudy Giuliani (b. 1944) grew up in Brooklyn, founded his Catholic school’s opera club, and took a strong early interest in politics. His “fiercely intelligent” mother, a voracious reader, was domineering. His father, a burglar, did time in Sing Sing. The rest of his “motley” family included police officers, loan sharks, and thugs.

In Giuliani, veteran reporter Andrew Kirtzman, who has covered Giuliani’s career for 30 years, mainly at the news channel NY1, details the life and career of this complex man most noted for a strong sense of moral purpose. After an early flirtation with the priesthood, he became a celebrated prosecutor. As US attorney for the Southern District of New York in the 1980s, he rounded up New York City mafia leaders and Wall Street bad boys.

In his two-term, law-and-order mayoralty of the same city, beginning in 1993, he significantly reduced crime (by nearly 60 percent) with the help of police commissioner Bill “Broken Windows” Bratton, who made sure the law was enforced for even the smallest acts of vandalism.

For his stirring leadership of a city devastated by terrorist attacks on the World Trade Center, Giuliani was quickly dubbed “America’s mayor” by Oprah Winfrey and “Person of the Year” by Time. He was knighted by the Queen of England and “deified” by the world.

“He became a living legend,” writes Kirtzman, who walked the still-smoldering streets of Manhattan with the mayor. “Rudolph Giuliani is the personification of courage,” said David Letterman, fighting back tears.

“Giuliani’s courage in the face of near death, his absence of fear when all was falling apart, and his candor with the public was a study in leadership,” writes the author, who clearly still wants to admire the former mayor.

Giuliani, “famously ascetic,” became increasingly focused on money and material things. With his international fame, there came a “creeping decadence”—a result of his loss of power as his final term in office ended. “Far from building upon the extraordinary stature he earned from lifting up the country in its darkest hour, he took it for a wild spin, cashing in on his fame, and gambling with his reputation,” writes Kirtzman.

He did so by establishing a consulting firm, Giuliani Partners LLC, with close aides. The company catered to corporate and government clients, many with dubious reputations, like Purdue Pharma, maker of Oxycontin, the painkiller whose widespread abuse created a generation of opioid addicts.

Once driven to impose his view of right and wrong on others, Giuliani now chose to “make money” off his “peerless record of accomplishment,” writes the author. “This brilliant man chose a shallow existence to fill the void.”

There were many factors at work, including his “growing fondness for creature comforts,” his increased womanizing and drinking, and his marriage to Judith Nathan, his third wife, a former medical sales executive, who encouraged his pursuit of wealth.

“He’d spent his entire adult life famous, feared, or beloved,” writes the author. “He was facing a long trip down.”

Kirtzman chronicles that disastrous descent in great detail, including Giuliani’s month spent recovering from depression at Mar-a-Lago, and his grabbing for a last chance at relevance as “a courtier of the host of The Apprentice.”

In the end, “Giuliani’s role was to enable the president, encourage his worst impulses, and lead his most malevolent battles.” Once hailed as America’s mayor, he was a shell of himself—“disorganized, hot-tempered, and at times befuddled. His personal life was in shambles. And he had a drinking problem.”

Giuliani is a well-written, balanced, and unvarnished portrait of a public figure whose downfall will sadden most readers.