The Girls Who Stepped Out of Line: Untold Stories of the Women Who Changed the Course of World War II 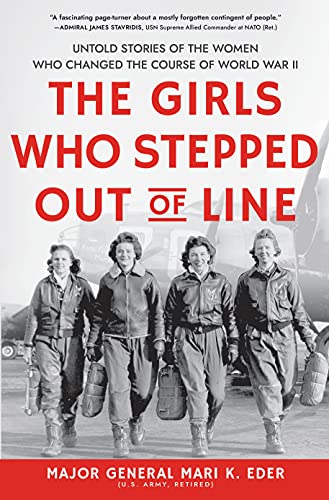 The Girls Who Stepped Out of Line by Major General Mari K. Eder is a distinguished addition to the growing number of publications excavating into public view the massive and varied contribution of women during World War II—a contribution that for many years has been accidentally or deliberately ignored.

The book is organized around 15 very different biographies of women (or as the title says “girls”), who “stepped out of line” often in dramatic ways. Unlike some other publications in this genre these women are not primarily stepping into jobs that have become vacant because of the departure of their menfolk into battle by becoming ambulance drivers, land girls, etc. The stars of this publication in many cases carved niches for themselves in war- generated activities such as code-breaking or smuggling jewelery out of Europe for Jewish families who hoped to eventually and successfully flee.

These biographies are bracketed by a strong Introduction and some slightly less effective concluding pages, which do, however, list Queen Elizabeth II as a girl who stepped out of line, as she “served in uniform as a truck driver and auto mechanic” during the war!

In her introduction, Eder muses on the fact that while, according to stereotype, women’s place was still supposed to be in the home; in fact, before and during WWI, many women had already disregarded this convention though they “did not benefit from the strength of feminist movements, women’s marches and technological advances that connect and empower so many women across the globe in the twenty-first century.” She cites Frank Moore’s Women of the War first published in 1867 that includes the biographies of 43 women who participated in the US Civil War.

As she notes, she herself had relatively little information about the earlier manifestations of female activism or the heroines of WWI, until she was asked to step in at the last moment to give a speech on “Leading in a Complex World” for the Association of the US Army’s (AUSA) annual symposium in Washington in 2017. She scrambled to find a few stories of outstanding women and gradually deepened her research to produce the current volume.

The individual chapters present a range of women’s experiences, some of whom deliberately set out to make a difference, and others who became heroines by accident. What is striking is that despite the male establishment’s acknowledgement that women might have crucial skills and aptitudes (soldering of metals, languages, cartography, telephony), they were regularly paid less and usually not given the official recognition they deserved during or after the war. These women often suffered “grinding racial and gender prejudice from the institutions they served.” And while many of them flourished after their discharge in political and related spheres, most did not receive acknowledgement of their war veteran status during their lifetimes. Eder notes however that several of them reached their centenary and finally got their due!

Tighter editing would have helped with the sometimes-complicated chronology of these stories, and occasionally the use of direct speech seems awkward. It would also have been interesting to have included some reflections on related more theoretical work such as Betty Friedan’s The Feminine Mystique (1963), which deconstructs the way political and economic forces conspired to make women, who had been forced back into the home when their men came back from battle, satisfied with their homemaking lot. But these are minor quibbles as this is overall a fascinating read.

Some favorites are Ida and Louise Cook who, under the pretext of going to the opera in Berlin, Vienna, Munich, Salzburg, and elsewhere, smuggled out enough jewelery “to enable Jewish families to buy their way to freedom, proving that they could provide for themselves and meeting Britain’s strict requirement to prove financial stability.”

Equally heroic were the women who built the Bombe: the two-ton machine that broke the Enigma messages the Nazi government used in classified communication with its armed forces. (“The Navy found that the delicate touch necessary to expertly craft the Bombe rotor wheels was better done by women than by men with large clumsy hands.”!) In March 2019, nearly 74 years after the end of World War II, the surviving nimble-fingered women were honored and had their first view of the completed Bombe for which they had provided all the component parts “as cogs in a machine.”