The Girls Weekend: A Novel 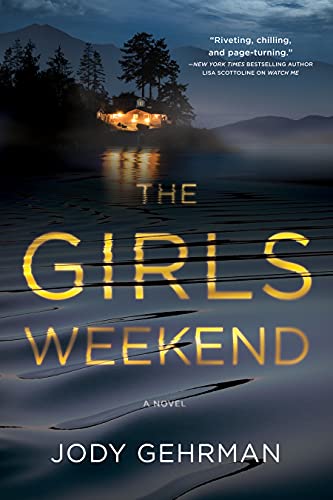 June Moody receives an unexpected invitation from an unexpected source. Her old college friend Sadie MacTavish, whom she hasn't seen in more than a decade, is having a girls weekend at her lavish estate in the San Juan Islands. Also invited are old friends Em, Amy, and Kimiko. Back in the day, they were known as the Fearless Five.

Sadie ended up marrying June's old boyfriend, Ethan. Both she and Sadie had competed for his attention, but he'd proposed to June first. Ultimately, she turned him down to travel the world, but even though she still thinks about him, she has no desire to rejoin the group now. Instead she makes plans to go camping with her current boyfriend, Pete.

Until she receives his text:

"Pete: I don't know how to tell you this, June, but I can't do this anymore.

"June: Can't do what, exactly?

"June: You're seriously breaking up with me via text?

After that, June decides to accept Sadie's invitation. She and Em take a road trip and drive up together. The scene is set. Five college girlfriends, some of whom have barely seen each other if at all since college, get together for a summer reunion, each one dragging a bucketload of baggage. What can possibly go wrong?

Here's what June is thinking during the drive there:

"For the hundredth time since I made the impulsive decision to come along on this trip, I wonder if I've made a mistake. Aren't reunions basically the Comparison Olympics? Here I am, already measuring my life against Em's; I know there will be a whole lot more of that in the days to come. . . . We were friends back in college, but there was always a competitive subtext to our relationship. Our need to one-up each other egged us on . . ."

". . . there she is. Sadie MacTavish. She's wearing wide-legged gossamer-thin pants in a rich shade of indigo. A cream sweater exposes her sharp collarbones. Her dark hair is loose around her shoulders, even glossier and blacker than I remember . . .

"I try to school my features into a serene and friendly expression, though it probably looks more like I've smelled something rank. I wish I'd worn something prettier than my faded jeans and stretched-out Nirvana T-shirt. Next to cool dewy Sadie I feel scraggly, homeless.

" . . . The knowledge that Sadie has stumbled on stellar success without much effort irks me. . . ."

Despite all the reminiscing about good times in the good old days, they don't seem to like each other very much. It hardly seems they would want to get together after all those years. The barely veiled enmity makes its appearance before the first drink is poured in the form of discord and misunderstanding over who is going to drink what.

No sooner is June shown to her room when she receives a text from Ethan, Sadie's husband, asking her to meet him at midnight in one of the other houses on the estate, which of course she does.

Suspense ramps up about a hundred pages in. Until then, this slow-moving story consists mainly of SAT (Sitting Around Talking.) In early pages, June, a college professor, has a conversation with one of her students in a scene that seems only peripherally related to the actual story. The book is written in present tense which some readers might find off-putting even though it's a popular literary construct these days.

With all the cloaked friction it's a wonder they were friends enough in college to want to get together so many years later. These are women within a stone's through of turning 40, but they at times lapse into behavior that mimics the conduct of senior high school girls.

The tension picks up when the women wake up in a drugged stupor after a night of binge drinking with no memory of what happened the night before. Sadie's not around. When they look for her, they find disarray in her opulent bedroom, expensive shoes and designer clothing strewn everywhere. Blood on the staircase. Bickering follows. June is mortified to find out she slept with the landscaper.

Sorry to say The Girls Weekend doesn't deliver the implied potential of its title. The actual writing is fine, the narrative flows, the dialogue is realistic, even the people are realistic, but it's hard to like a book with so few reasons to like the characters. It's a light beach read for teens and twenty-somethings who dream of living in an estate like Sadie's but end up living June's life instead. The over-the-top description of what it's like to be uber rich seems to be more an illustration of what it's like to waste money.

The ending is a long, long, twisty multifaceted reveal with more SAT. With so many possible killers, readers have many options and are bound to finger the right one at some point in the story, but the motivation might not be so readily guessable.

All in all, it's a Mean Girls reunion that needed more, but also needed less.