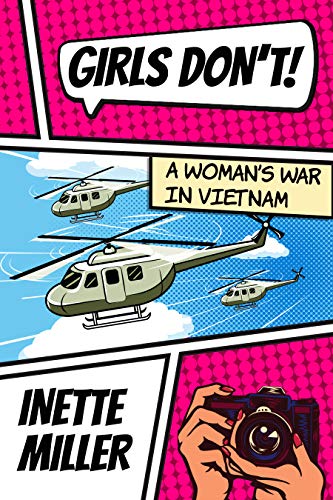 Inette Miller has the distance and detachment of a journalist trained to see the big picture—and the heart of a woman who understands what it is like to be “the other.” It is these differing perspectives that make Miller’s Vietnam War memoir Girls Don’t! so compelling.

Miller grew up in a time and place when women were generally expected to marry and have children. A job and a career came second to being a wife and mother. Miller does marry, but largely because in doing so she can go to Vietnam, a journey she makes precisely “because that’s not where girls were expected to go.”

In Saigon Miller finds work as a stringer for Time magazine. Her husband Bob is a draftee who both disagrees with the war and feels an obligation to serve. Their posting in Vietnam spans what, at the time, was considered a hopeful period between 1970 and 1971. Only later does it become clear that the war is not about to end and instead carries on for four more years. Miller tells her tale with the gift of hindsight while still managing to convey the voice of her much younger self. To help illustrate her inexperience she uses a series of numbers to describe her flight to Vietnam.

In Vietnam Miller once again uses numbers to show just how rare her position as a female war correspondent was. According to Miller, between 1965 and 1973 there were 1,742 American reporters accredited to American news outlets in Vietnam, of which 232 were women, half of whom were in the country less than a month and most of whom never left Saigon.

Miller spent more than a year in country. She not only left Saigon but left Vietnam as well, traveling to Cambodia and Laos. In Cambodia Miller journeys to the countryside to see the destruction American and Vietnamese troops have caused, helping readers understand better how the war made some Cambodians more receptive to the initial appeals of the Khmer Rouge. Her response to the devastation has as much to do with her position as a reporter as her status as a woman in a man’s world.

“Were there protocols for responding to annihilation? I will not be a girl!”

And yet it is her sex that allows her to see the stories her male colleagues have missed, including how young country girls are being trapped into lives of prostitution. That American soldiers frequented prostitutes is no surprise. That Miller’s male newsroom colleagues paid for sex with underage girls is more disappointing and helps explain why a woman reporter was needed to tell the girls’ stories.

Miller has additional insight into how the war impacted locals because, unlike many of her peers, she lives not in her own private residence with maids and cooks but in the home of a local family. Her friendship with one of the older daughters in the home exposes her to how a relatively well-off urban Vietnamese family experienced the war. Her marriage exposes her to another side of the conflict, that of the unlucky young men drafted to fight a conflict many of them had very little hope of understanding.

“He knew exactly how many days until his private war ended. The larger war? It went on forever.”

Miller’s war has an ending, but she makes clear the fight in Vietnam was not the only battleground she faced. It is this inner coming of age conflict that makes Girls Don’t! more than just a war story. Miller’s struggle to make a name for herself in a man’s world is a journey many women still face, although often to a lesser degree. Her words will serve as inspiration for those who choose to follow the path she blazed.

For others, they will serve as a reminder of the human cost of war, not the numbers, but the people: the reporters who didn’t return from Cambodia, the children burned so badly they lacked faces, the baby-faced draftee sunning himself on sandbags just before an explosion. Miller paints a picture of them all. It is a picture that will stay with readers long after they finish her memoir.