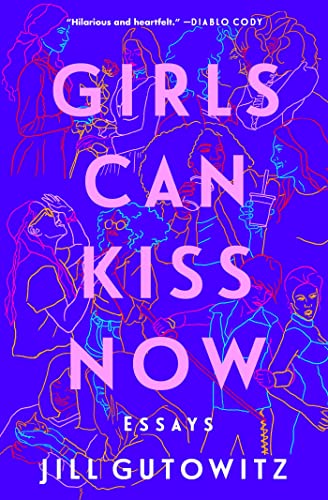 Girls Can Kiss Now by Jill Gutowitz has been greeted with rapturous anticipation by a range of American publications and blogs, Vogue, Marie Claire, Harper’s Bazaar, Bustle, Electric Lit, Thrillist, and Glamour among them. The collection of autobiographical essays details Gutowitz’s gradual acceptance of and rejoicing in her lesbian identity, referencing the pop culture icons and “celesbians” who helped her along the way.

Gutowitz came out in 2015 at age 23 having struggled with homophobia internalized through her conventional upbringing. “Each essay is an attempt to revisit and exhume my pain through a pop culture lens.” She is a self-confessed “pop culture junkie” obsessed with celebrities and their relation to their fans, focusing on film, TV, and music rather than popular fiction or literature. She considers that the film Orange Is the New Black (2013) marked the full mainstreaming of lesbianism into popular culture, making lesbianism “fucking cool.”

Gutowitz makes no claims to being an LGBTQ or feminist scholar, and Girls Can Kiss Now is not intended as a comprehensive or analytical approach to issues of diversity and inclusion. Some early chapters trail a promise of more depth in posing the question as to whether “the conversation around LGBTQ people swung more positive because more celebrities are out, therefore normalizing queerness? Or are more celebrities out because queerness has become more normalized, accepted or even valued?” Gutowitz plumps for the first option, and does not explore the effects of the commercialization and commodification of “queerness,” though noting in her chapter on “the current lesbian cannon” that not all heroes/heroines on the list are queer. A more analytical approach would require her to stray into other dimensions and narratives—political, human rights, economic, socio-medical —which are beyond her intended brief.

A collection of essays within one cover does not automatically make a book, and there is much chronological and substantive overlap between chapters. Some of the most interesting and entertaining are “The Ten Most Important Sapphic Paparazzi Photos in Modern History,” featuring among others, Cara Delevingne, Miley Cyrus, Lindsay Lohan and partners; and The Current Lesbian Cannon, as It Stands referred to earlier.

Gutowitz notes triumphantly that in coming out she fell in love with femininity and started to value women, and “I now have the luxury of being freed from the prison of desiring male attention.”

As a reader one can only feel happy that she has found her way and hope that Girls Can Kiss Now will light the way for others entering the same journey.