The Girls: An All-American Town, a Predatory Doctor, and the Untold Story of the Gymnasts Who Brought Him Down 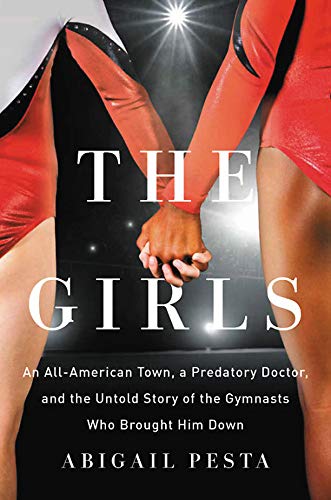 “While many of the gymnasts gave statements at Nassar’s criminal sentencing, for some, The Girls offers them a first opportunity to speak. By doing so, they break out of the role of victim and transform themselves into the role of heroic survivors.”

For anyone who believes the heyday of the Hollywood casting couch was a thing of the past, think again. The #MeToo movement has brought into the light of day a litany of stories from women who have experienced unwanted and abusive sexual advances in every walk of life—women who are no longer afraid or ashamed to speak up.

Lest we try to console ourselves that at least the behavior was limited to adults in the workplace, along comes a story that shatters that myth. In her new book, The Girls: An All-American Town, a Predatory Doctor, and the Untold Story of the Gymnasts Who Brought Him Down, author Abigail Pesta lays out the “career” of Larry Nassar, doctor to America’s gymnasts, whom Pesta calls “the most prolific sex criminal in American sports history.”

Nassar emerges as a serial predator who molested as many as 500 girls and young women over a period of decades. Given those numbers, one wonders whether the qualifier of “in American sports history” is required.

The reader will be horrified at not only the actions of Nassar, but also the verbally and physically abusive conduct of coach John Geddert, who, in effect, drove the girls into Nassar’s web, but also by a conspiracy of silence by so-called “responsible adults.” Those conspirators include law enforcement officials, administrators at Michigan State University, and officials of USA Gymnastics. Their silence shamefully allowed the abuse to persist and flourish.

The predations started with inappropriate touching but progressed to digital penetration under the guise of “treatment” as Nassar groomed his young charges. Shockingly, as the author reports, many times the abuse took place while parents were physically present but Nassar had positioned his massage table so that they could not actually see what he was doing.

Sadly, Nassar knew exactly what he was doing by preying on young girls who were unsure what was, or was not, proper treatment techniques, and who were scared into silence by fear that their gymnastics dreams would be nipped in the bud by adults who wouldn’t believe them. But for many of the adults, it was less a matter of not believing as it was an unwillingness to believe, particularly when it meant to acknowledge that some abuse occurred in their very presence.

For others, such as administrators at Michigan State, for whom Nassar also worked, and the gymnastics organizations involved, disbelief was financially better than belief. The result was a cone of silence that virtually guaranteed that the abuse could continue. Attorney Jamie White, who led the legal charge against Nassar on behalf of some of the girls, said of Nassar, “He had every single tool a sexual predator would want: protection, fame, power.”

While many of the gymnasts gave statements at Nassar’s criminal sentencing, for some, The Girls offers them a first opportunity to speak. By doing so, they break out of the role of victim and transform themselves into the role of heroic survivors.

The damage to these young women has been immeasurable, from depression to trust issues to self-mutilation and even suicide, but they have reclaimed control of their lives from a predator who is destined to die in prison. The Girls is their story of courage and Larry Nassar is now nothing more than a footnote. As the author writes, “And the sister survivors will grow ever stronger.”