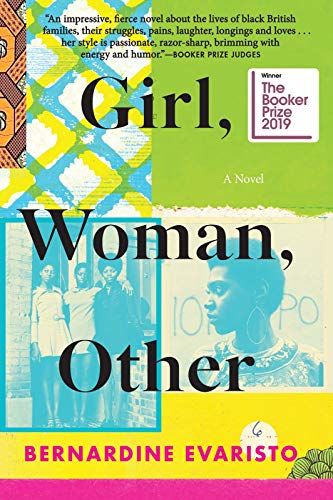 Prize-winning novels carry uncomfortable baggage. On the one hand, they have been anointed Important Works of Literature. On the other, that Importance (always capitalized) implies a formal inaccessibility, a lack of interest to the passing reader. Sometimes, the winners of major prizes pose genuine mysteries (not least, why they were chosen). Other times, as with Bernardine Evaristo’s receipt of the 2019 Booker Prize, such novels are genuinely accessible, charming, and urgent.

In fact, Evaristo’s novel won the prize jointly with Margaret Atwood’s The Testaments. The Testaments was long-awaited, a sequel to The Handmaid’s Tale, and ultimately disappointing. Among all of Atwood’s works, it stands as the least current, the least insightful into the complexities of modern gender, the least encompassing of women’s lives beyond the middle-class and white.

Girl, Woman, Other explores the intersections of lives, all of women and non-binary people, most of them black. Amma, a black lesbian playwright whose entire career has set her against the British establishment, realizes that her life is about to change: “Amma’s play, The Last Amazon of Dahomey, opens at the National tonight”

The absent period at the end of the quotation is no mistake. Girl, Woman, Other is a novel of commas and broken lines, of sudden breaks in thought, and a single period to mark its ending. Evaristo’s facility with verse fiction is such that the text moves in utter harmony, without disruption. The novel flows seamlessly, like water, from through to thought, character to character.

Amma’s friends, her lovers, her daughter and her daughter’s friends, their teachers and classmates, friends and exes, lost connections and re-discovered ones emerge through the interlinked stories. In most cases, the connections are clear: the woman who picks up the novel’s thread has already brushed against the woman who laid it down. Only at a few moments are we left wondering, Who is this woman? Why is she here?

There are answers. Every thread is bound up in the finished work. But some don’t appear to fit until the pattern is complete.

Evaristo names myriad ways of being British and black. Amma’s parents have separate histories, each uncomfortable in its way: “Mum, Helen, is half-caste, born in 1935 in Scotland

Her father is an exile: “my father was devastated as having to flee Ghana so abruptly, she eulogized at his funeral”

Yazz, Amma’s daughter, is far less charitable to her parents. Yazz is at university, hangs with her militant “squad” of “woke” young women, and reminds both her parents (Amma and queer-father sperm donor Roland) that their revolutions have failed: “when they leave uni it’s gonna be with a huge debt and crazy competition for jobs and the outrageous rental prices out there mean her generation will have to move back home forever, which will lead to even more of them despairing at the future and what with the planet about to go to shit with the United Kingdom soon to be disunited from Europe which itself is hurtling down the reactionary road. . . .”

Yazz’s father Roland functions as a counterpoint to Amma. Where Amma has largely stayed radical, Roland (though gay, though black) has actively made himself part of the Establishment. He’s a Professor of Modern Life, a fixture on television, and, he is sure, “a winner and a household name

“among the educated classes

Roland’s relative wealth and security make him an ambivalent character. He’s determined to miss the point of Amma’s work, as long as missing it will appeal to those “where it counts.” His review of her play laments her lack of engagement with Western ideas: “perhaps the play could also have employed even more techno-dramatic devices in its production such as holograms of the original Amazons of Greek myth hovering as peripheralized spectres counterpointing the main drama thereby adding a more classical relevancy to its thesis?”

While Amma, Yazz, and Roland, with their culture classes and juxtaposed points of view, initially seem all that’s necessary, they fit neatly within the novel’s larger flow. Other women, in the audience, in the past, have separate experiences of blackness, of these women in particular, of inclusion or exclusion in British life.

The relatively brief sections given to each character allow the novel to maintain its flow without a core central plot. It remains, through each person’s eyes, eminently readable and emotionally intense. While Atwood’s novel was valorized for its relationship to its prequel, and represents a white, static vision of gender, Evaristo’s is smarter, more complex, more engaged and engaging.