The Girl Who Could Fix Anything: Beatrice Shilling, World War II Engineer 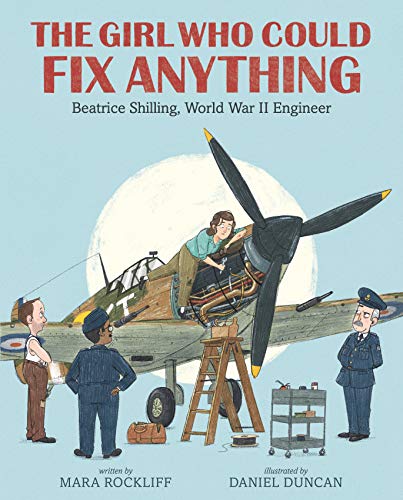 “Instead of focusing on the discrimination Beatrice faced, both words and pictures show the difficulties without focusing on them. Beatrice’s skills, her determination and hard work, are highlighted instead, as they should be.”

Mara Rockliff is known for writing fascinating nonfiction picture books, introducing young readers to history that isn’t generally known. The Girl Who Could Fix Anything is a welcome addition to this collection—and to any home, school, or library. With tight pacing and a keen eye for detail, Rockliff introduces us to Beatrice, who never quite fits in. She “wasn’t quite like other children,” preferring tools to candy. She “wasn’t quite like other students” as the only woman in an all-male engineering college classroom. But Beatrice proves herself by the quality of her work, earning herself a reputation for fixing anything. She’s so successful that the Royal Aircraft Establishment puts her in charge of her own small team, working on airplane repair during WWII, a war fought largely in the skies.

When a fatal flaw is revealed in the British fighter planes, one that causes planes to stall during steep dives taken to evade enemy fire, Beatrice is the one who figures out the tough problem and even better, comes up with a clever, simple-to-use fix. All of this is dramatically and clearly described as Rockliff leads the reader through Beatrice’s many accomplishments.

Daniel Duncan’s lively art brilliantly echoes the wry words in the book, the two together providing humor to the story. Instead of focusing on the discrimination Beatrice faced, both words and pictures show the difficulties without focusing on them. Beatrice’s skills, her determination and hard work, are highlighted instead, as they should be.

The Author’s Note fills in many fascinating details about Beatrice’s life and the barriers she faced. By putting so much information in the backmatter, Rockliff has freed up the text of the story to show the main point: “Beatrice knew that as a girl she wouldn’t be quite like the other engineers—and she wasn’t. She was better.”