The Girl Who Kicked the Hornet's Nest—Millennium Volume 3 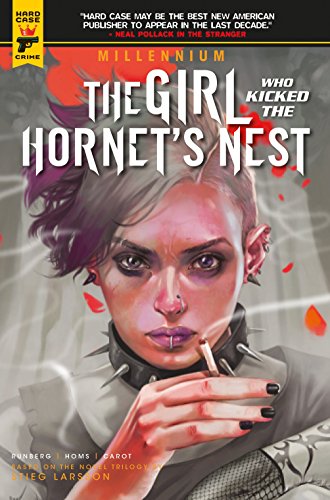 “So much evil,” says Lisbeth Salander. She says this not in fear, but as if in stunned wonder. Wasp is bound by the coils of evil which flex, painfully and slowly squeezing the life out of her. Each coil serves a different dark master, which should have worked to protect her. Her father, her brother, the medical profession, the national police and the courts all should have been there for her. Instead they all seek to obliterate her. They all seek to distort the nation and support their personal addictions to greed and depravity. Salander more than survives their attacks. She triumphs over those who would destroy her and her country.

The Girl Who Kicked the Hornet’s Nest is now a graphic novel. It is the third in the Millennium trilogy originally authored by the late Stieg Larsson. It is re-adapted by the team of Sylvain Runberg, writer, Jose Homs and Manolo Carot, artists, and Rachel Zerner, translator. They do a superlative job.

The trilogy of novels has already successfully made it to the silver screen. The first two novels have also evolved into graphic format. The Girl Who Kicked the Hornet’s Nest splendidly finalizes the graphic trilogy.

The Hornet’s Nest, retold, is a story worth the retelling in graphic format. It is crisp of word and lively in ink. The layout of the storyboard panels moves the tale along with smooth clarity. Scenes switch as easily as they did in the novel and movie. Moods are well set by the artistic lighting used by Homs and Carot. A car bomb literally seems to shred the borders of its panel.

The characters as drawn sync well with the mental images of them cast by Larsson and their celluloid selves. Plague looks and acts the skillful geek. Lisbeth looks, well, like the Devil’s own girlfriend. She behaves as such, a hell’s child created by a life of inflicted torment.

On the subject of children, their depiction is an anomaly to the rest of the characters. Perhaps humorously intended, their cartoonish, giant-eyed, plush animal clutching figures coo and fuss to the extent that the reader hopes with a fully malevolent heart that Niedermann or other villain dispatches them as quickly as possible. Thankfully their roles are fleeting.

The graphic novel closely resembles its print and film ancestors. Without spoiling its exotic conclusion, however, there is little doubt that the story of Salander ends with a trilogy. The Girl will return. And her followers will again be delighted.