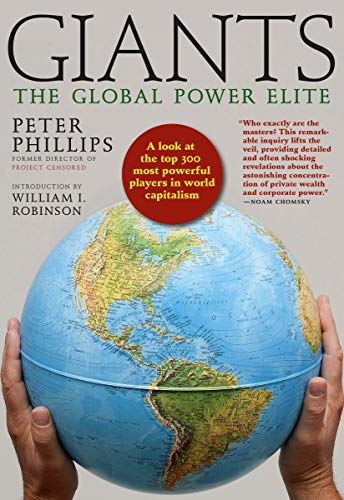 “A copy of Peter Phillips’ Giants: The Global Power Elite should be in everyone’s book case, like a good dictionary or atlas.”

Peter Phillips’s Giants: The Global Power Elite is a scary book to read because it makes one realize just how powerless one really is.

Terms like the “1 percent” and “ruling class” are increasingly being used to explain the growing inequality defining American society. Phillips, a professor of political sociology at Sonoma State University, details exactly who—to revise the legendary sociologist’s C. Wright Mills’ phrase—the new “power elite” are and, more important, how they collude to ensure control over the global capitalist marketplace.

Phillips identifies the super-super-rich as the multibillionaires who are part of the global “Transnational Capitalist Class.” In 2017 they included Bill Gates ($88.8/b), Jeff Bezos ($82.2/b) and Warren Buffett ($76.2/b). “These billionaires are similar to colonial plantation owners,” he writes. More importantly for Phillips, they are but the tip of the iceberg that he identifies as the “Global Power Elite.”

Phillips employs a very clear and easily readable structure to layout his analysis. He divides the new “Global Power Elite” into four sections—(i) Managers (i.e., the financial elite); (ii) Facilitators (i.e., bureaucrats and policy planners); (iii) Protectors (i.e., military-intelligence apparatus of power); and (iv) Ideologists (i.e., public-relations operatives and propagandists). Like a good research resource, each section is divided between an overview analysis and a series of detailed profiles of about 300 of the leading power players in today’s world economy.

Phillips carefully considers each of the four sectors, including the interlocking relations between them and the key corporate officials running them.

1.        “Managers” are the financiers who oversee global capitalism. Phillips points out that in 2017, the top 17 trillion-dollar-plus investment-management firms controlled $41.1 trillion. He focuses on 199 individuals that he identifies as the central decision makers of global capitalism. They include Jamie Dimon, Chairman and CEO of JPMorgan Chase; Larry Fink, Chairman and CEO of BlackRock; and John McFarlane, Chairman of Barclays Bank.

2.        Facilitators include bureaucrats and policy planners who manage the global capitalist marketplace. They include the Group of 30 and the Bilderberg Group as well as such elite policy-planning organizations as the G7, G20, IMF, WTO and the World Bank along with the Group of Thirty and the Trilateral Commission.

3.        Protectors include what Phillips calls “the US/NATO military empire” (that includes the CIA). He notes that the U.S. maintains 800 (or more) military bases in 70 countries and territories across the globe; Britain, France, and Russia have about 30 foreign bases. The author notes, that one needs to “understanding permanent war as an economic relief valve for surplus capital is a vital part of comprehending capitalism in the world today.” He adds, “war also serves a repressive function of keeping the suffering masses of humanity afraid and compliant.” In addition, protectors include for-profit military companies like the former Blackwater (a part of Constellis Holdings) and G4S.

Phillips argues that these four sectors share a common goal: “Their constant objective is to find enough safe investment opportunities for a return on capital that allows for continued growth. Inadequate capital-placement opportunities lead to dangerous speculative investments, buying up of public assets, and permanent war spending.”

What makes Phillips’ exhaustive research more rewarding, if not scarier, is the level to which the new power elite collaborate and socialize with each other. Put simply, they all are wealthy and have significant stock holdings in one or more of each other’s operations.

He details the overlapping corporate (and nonprofit) boards they sit on, the same elite universities they’ve attended (e.g., Harvard) and the exclusive social gatherings they attend (e.g., World Economic Form). As Phillips finds, “It is certainly safe to conclude they all know each other personally or know of each other in the shared context of their positions of power.”

A deep tension underscores Phillips’ study, one neither fully acknowledged nor carefully addressed. He writes with a sense that capitalist globalization has been fully realized and that the nation-state that built the modern (and postmodern) economy has been superseded. For him, a major economic/financial crisis (e.g., 2008 housing/banking crisis and resulting Great Recession) and insurgent destabilization at the periphery of power can been easily contained. But is this the case?

Donald Trump’s election suggests that the nation-state is not obsolete and, under a certain type of anti-globalization, anti-finance-capitalism conditions, the system of power that Phillips lays out could be destabilized. One could well imagine that under certain crisis conditions, like another Great Depression brought about by a crisis in the finance/banking sector, the U.S. or other central banks could impose unanticipated constraints, if not outright nationalization, on the leading finance/banking operations.

Similarly, what if a nation-state leader, say in the U.S., declared war on a country, like China, that it—or its political/military leadership—considered to be a threat to “national security”? What would happen to the intimately linked global system of capitalism?

In addition, while acknowledging the deepening environmental crisis, i.e., global warming, and noting that some of the new global power elite are mindful of the looming natural disaster, Phillips does not incorporate this tension within his overall analysis. However well-intentioned some within the Transnational Capitalist Class might be, the ceaseless quest for profit drives the system as it has for the last four centuries and nothing, including the end of human civilization, appears capable of containing this impulse.

Phillips concludes his scary study on a sad, if hopeful, note. He recalls the well-intentioned words of Pope Francis, the heroic efforts of the Occupy Movement and the inclusion of “Universal Declaration of Human Rights,” adopted by the UN’s General Assembly in 1948. One can only hope that the truths included in Phillips’ important book speaks stronger than the power of the new global power elite.

A copy of Peter Phillips’ Giants: The Global Power Elite should be in everyone’s book case, like a good dictionary or atlas.