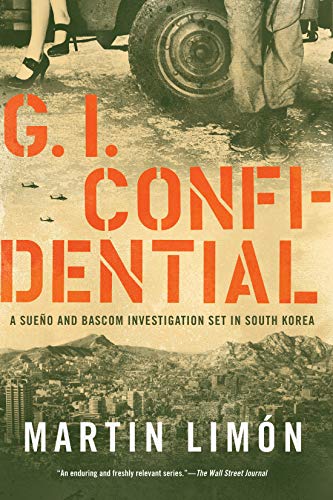 “GI Confidential is one of Limón’s best to date in a series that never fails to entertain.”

Just over 20 years after the devastation of the Korean War, and only a few months after the withdrawal of American troops from Vietnam, US Army Criminal Investigation Division agents George Sueño and Ernie Bascom return to action in GI Confidential, Martin Limón’s 13th novel in his series set in South Korea.

Once again they find themselves pulled in different directions. Assigned to the drudge work of chasing down Koreans buying merchandise from the 8th Army Post Exchange and selling it on the black market, George and Ernie are told to sit on the sidelines when a team of rogue American GIs embark on a series of increasingly violent bank robberies that soon result in the murders of innocent Korean bystanders.

But when have mere orders stopped them before? In typical Sueño/Bascom fashion they launch their own investigation, only to be interrupted by an assignment directly from Colonel Brace, the 8th Army Provost Marshal. A highly problematic reporter from the Overseas Observer has published a front-page story accusing Lt. General Abner Jennings Crabtree, the officer in charge of all divisions along the Demilitarized Zone, of trucking Caucasian prostitutes up to the DMZ as “party girls.”

Ordered to track down this reporter, Katie Byrd Worthington, and get to the bottom of whatever might be bothering General Crabtree, George and Ernie quickly find themselves facing a spitfire reporter who’s more than they can handle, rogue GI bank robbers who are determined to kill them, and a general officer who’s the key piece in a puzzle that may destabilize the entire Korean peninsula.

Martin Limón’s fast-paced, entertaining series follows a similar pattern each time out. While solving cases, George and Ernie must work their way through social issues of the day, often involving pushback from strong female characters determined to improve the situation of women in South Korea. Meanwhile, George’s interest in Korean culture and his ability to speak the language help further his efforts only so much.

Limón also pays close attention to the political position in which the United States found itself in the 1970s as a result of the mutual defense treaty of 1953 that put American troops in the Republic of Korea. George and Ernie must constantly stickhandle around the uneasy relationship between the US Army and ROK forces, and GI Confidential presents one of Limón’s best explorations of this often-problematic situation.

Most enjoyable, though, are his characters. George is the level-headed, serious one whose first-person narrative tells the story. As for his partner, “When it came to violence, Ernie Bascom made damn sure he was never left out.”

The usual cast returns in GI Confidential, including Staff Sergeant Riley, Colonel Brace, and “Mr. Kill,” Chief Homicide Inspector Gil Kwon-up of the Korean National Police, upon whom George relies as perhaps the only competent law enforcement presence in the ROK—other than himself and Ernie, of course.

As new additions, General Crabtree, Command Sergeant Major “Screech Owl” Tapia, and the indomitable Katie Byrd Worthington are by turns amusing, frustrating, and mysterious. Limón has a knack for surrounding his protagonists with a range of personalities that always manage to keep them on their toes and keep his readers amused in the process.

Limón’s writing style is casual and humorous, and his military experience, which included a decade in Korea, lends an unmistakable realism to the atmosphere of his novels that brings readers back for more each time.

GI Confidential is one of Limón’s best to date in a series that never fails to entertain.