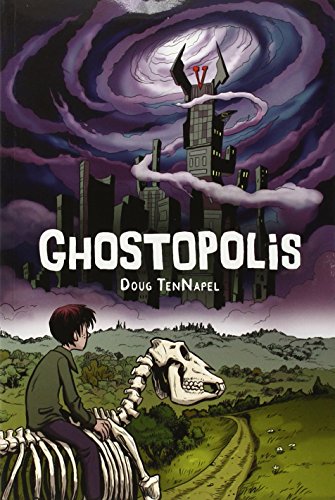 Ghostopolis is perfect proof that a graphic novel can tell as solid and detailed a story as a more traditional novel—and the fact that it’s aimed at kids and still manages this feat makes it even more amazing.

This is the story of Garth, a young boy who’s come to grips with the fact that he’s dying, even though his mom keeps looking for new medical options. It’s never called by name, but the assumption is that it’s cancer of some sort, something invariably fatal, but not the sort of illness that stops you from going on unexpected adventures. Which is exactly what happens when a slightly hapless ghost hunter, Frank Gallows, accidentally transports Garth to the afterlife while sending a dead horse back.

The adventure that follows is creepy, sweet, charming, and more than a little touching. Garth is wise beyond his years, as is expected of a kid dropped into such an adventure, but he never comes off as preachy or as a mouthpiece: he’s his own character, and he’s honestly brave and clever. Everything he does makes sense both in the context of his character and in the context of the story, which is much more adult than one would expect. Just like the real world, the afterlife is adult, and the kids have to navigate it as best they can. On his journey back to the capital city of the ghosts, Garth learns that a corrupt politician has damaged the way things are supposed to be, that his grandfather can be the same age as him, that love sometimes can conquer anything, that old mistakes affect the present, that time is relative, and that the right thing is still the right thing—even when everything around it seems to try to make it otherwise.

And it deals with topics usually skirted in children’s lit: death, love, regret, politics, social responsibility, adulthood—with a fearless straightforwardness all the while maintaining a light and delicate touch perfect for the age group and refreshing for adults.

It’s not a long story, but it ends with the reader wanting more, and that’s exactly what it should do. Even if you aren’t generally the sort to read stories involving zombies, ghouls, and skeleton people, this is a fantastic read. Ghostopolis is fresh, honest, sure of itself in the way of a much more adult work, and worthy of sitting on the shelf with the best of the genre. If you’ve got kids, give them this one to read. If you don’t read it yourself. Heck, even if you do, read it yourself. It’s got enough layers for everyone.