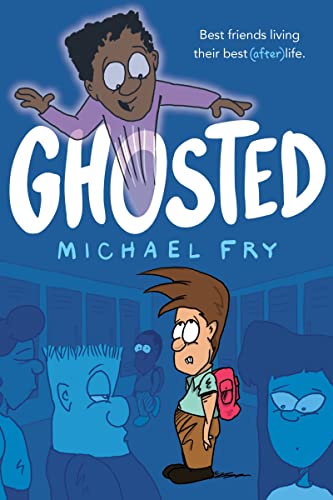 “sure to be loved by The Wimpy Kid set, a fun mix of cartoons and text with just the right amount of middle-school angst.”

Michael Fry combines cartoons and text in the style of The Wimpy Kid series in his new book, Ghosted.

Larry, a typical seventh grader, not popular, more invisible than not, has just lost his best friend, Grimm, in a freak accident (lightning literally strikes). This is not a story about loss and death, however. The premise is more humorous with Grimm appearing as a ghost to Larry with clear unfinished business that Larry has to finish for his friend, since he can’t do it anymore.

The two boys have a long bucket list of things they want to accomplish, from building muscle to being a hero to kissing a girl (the most dangerous of the three). The list is so long, this book at first appears to be the first in a series of ghostly hi-jinks. Spoiler alert: since the bucket list premise quickly gets old, it’s fortunate that Fry chose instead to find a way to release Grimm from his earthly bonds, allowing the ghost to move on to wherever ghosts are supposed to go.

Before that, however, the reader feels Larry’s confusion over his ghostly best friend. When the boys first see each other after Grimm’s death, they have the same reaction: “we both started to smile. Then, despite all the weirdness, we had the same thought. This is awesome!”

That glee doesn’t last. Grimm becomes as much a pest as a friend. What started as fun takes a different turn: “I wanted him to stay. I mean, if he wanted to stay. But I also wanted what was best for him. And maybe moving on was for the best.” It’s a mature insight that feels a bit off in a seventh grader. At that age, most kids would desperately want a dead friend to still be there for them, especially if that friend was a ghost, which is presented as fun and cool, maybe annoying at times, but not at all creepy.

Determined to help Grimm “move on,” Larry starts on their bucket list. But bathing naked in spaghetti doesn’t work nor does hugging a sloth. The stakes get higher as Larry learns that Boogie, the loner kid nobody likes because of all the weird rumors about him, has been the victim of silly stories spread by none other than Grimm. The two friends now have another job to do: repairing the harm done to Boogie. Predictably, this doesn’t go as planned. “We were trying to do the wrong thing for the right reasons. We were trying to help someone who didn’t want our help.”

Will Larry figure out what the right thing is? Will he be able to let go of Grimm, to lose his best friend twice? Will he ever have a friend again? And what about kissing a girl? Fry presents a story sure to be loved by The Wimpy Kid set, a fun mix of cartoons and text with just the right amount of middle-school angst.