The Ghost Ships of Archangel: The Arctic Voyage That Defied the Nazis 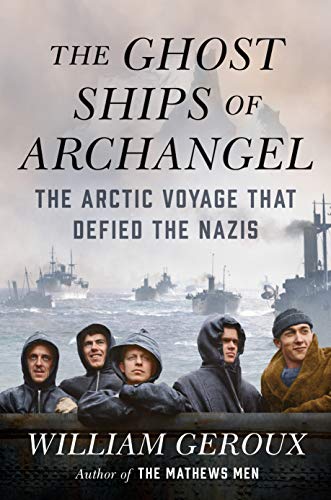 "Ghost Ships grabs the reader with action from the beginning and keeps the adventure going throughout."

The battles of the supply convoys to the Soviet Union's Murmansk and Archangel against "not only German bombers and U-boats but the extreme weather" remain a little remembered story. For the first year of the United States in World War II, the "front lines of America's war against Nazi Germany would be the Arctic convoys" to Russia.

The freighters ranged from "rusted old tubs from the previous world war" to new, welded, and dangerous Liberty Ships. By sailing the Troubadour under the Panamanian flag, for example, the U. S. Navy "exempted the vessel from stringent Coast Guard inspections and allowed the hiring of foreign mariners at low pay." Its boilers "had not worked properly since the Italians sabotaged them back in Jacksonville."

The crews varied as much as their ships. The 46 man crew of the Troubadour, a ship followed throughout this story, for example, "came from seventeen nations."

These sailors often proved violent and unstable. James Baker North, a crewman followed through the book, survived this dangerous voyage only to flee the ship in the end out of fear of his shipmates robbing him of his pay. When the Christopher Newport went down from a torpedo attack, it's captain "took a revolver aboard the rescue ship," he claimed "to control the black members of his crew."

Distance to the Soviet Union from the United States became the great strategic enemy. The Japanese blockaded Siberia, and anything arriving there still had to cross many thousands of miles of Russia along the Trans-Siberian Railroad. The journey through Iran similarly came to more than 15,000 miles.

The Murmansk routes to the decrepit starving railhead port of Archangel had the advantage of a short distance but had to pass Nazi occupied Norway and across some of the most naturally treacherous waters in the world. These convoys sailed less than "800 miles from the North Pole" which confused ship gyrocompasses.

So near the Arctic, the ships dealt with "dense, billowing fog that could persist for days," mirages, brutal cold, storms, ship damaging icebergs, "confused sonar," and "distortion of night and day." Convoy PQ-17, the subject of the book, "lost two and a half ships before encountering the Nazis or even getting out of sight of Iceland."

The German air and sea forces had problems too. Lack of fuel seriously curtailed its operations. Its great warships had to navigate shallows, narrows, and fog. The full force of its bombs and firepower could only come into play in a limited area. Submarines had to contend with steel walls of British warships.

At the most critical point of the journey of Convoy PQ-17, First Sea Lord Sir Dudley Pound made the disastrous decision to withdraw the naval escort and for the ships to scatter and make their own way individually to Archangel. The admiral falsely believed that the escort ships had to break off to fight the nearby German Tirpitz, "a floating fortress" and "the most powerful ship on earth."

The German military then had "a feeding frenzy, rushing from one helpless ship to the next." Convoy PQ-17 lost 22 of the 33 remaining freighters and two other ships to enemy action. A friend of Winston Churchill, Pound escaped censure.

Like many similar modern books, Ghost Ships grabs the reader with action from the beginning and keeps the adventure going throughout. Background and technical information, as also in similar books, comes across at times as disorganized and disjointed until the main story of Convoy PQ-17 becomes the single narrative.

The book has good maps (although questionably placed), illustrations, annotation, and a bibliography.