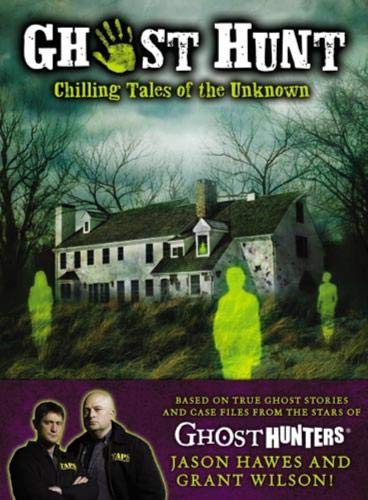 The guys from T.A.P.S. are delving into the scariest territory of all: adolescence.

Jason Hawes and Grant Wilson’s first foray into the realm of young adult fiction is Ghost Hunt: Chilling Tales of the Unknown, a collection of imaginary stories based on real-life cases investigated by the “Ghost Hunters” TV series on the SyFy Network. The familiar T.A.P.S. logo adorns hats, shirts, converted Roto Rooter vans—now it graces the cover of a book aimed at a young audience.

Tweens love to shiver between the pages from R. L. Stine’s Goosebumps series to the writings of Christopher Pike, and this particular installment is much like the T.V. show—more technical than emotional. The focus is on electromagnetic field detectors and electronic voice phenomena rather than blood-curdling screams and heart-racing panic. By employing a female point-of-view through new team member, Lyssa Frye, the book attempts to target both genders, but with more terminology than horror, it is a better fit for a boy’s bookshelf.

The publisher’s sampler includes two chapters. The first is “Pennies from a Ghost,” where two brothers keep finding seven pennies in their room arranged in the shape of a flower. The spare change appears in different locations next to the bed, under the window, etc. Lyssa fields the distress call on her first day at The Atlantic Paranormal Society office. The reader experiences the investigation through her eyes as the new chief interviewer. She has a panic attack investigating a dark basement with Jason:

“This is harder than it looks! Lyssa realized suddenly. She was talking to the dark. She was asking a ghost to show itself. Most people would be running the other way. But I’m not most people. I’m a T.A.P.S. investigator. Or at least she was trying to be one.”

The end result has shades of the plot from Zac Efron’s Charlie St. Cloud.

Chapter Two, entitled “The Ghost of Grandma Helen,” explores an area not often addressed on the show: psychic mediums. The goal of any T.A.P.S. investigation is to debunk paranormal claims. They rarely, if ever, turn to those with the ability to converse with the dead. However, the team turns to a psychic to commune with the spirit of a deceased grandmother who is appearing to her four-year-old granddaughter. This paranormal dialogue is not on the level of Kate Hudson’s terrorizing ordeal in The Skeleton Key, but it is a departure for T.A.P.S. It concludes with a poignant ceremony at the family gravesite.

The end section is a Cliff-Notes/Wikipedia introductory guide to ghost hunting. Told in the narrative voice of Jason and Grant, the appendix adheres in tone to the T.A.P.S. philosophy: “If you set out to prove a haunting, anything will seem like evidence. If you set out to disprove it, you’ll end up with only those things you can’t explain away.” It’s a junior-high entry course to Ghost Hunters Academy. The seven steps of the T.A.P.S. method are explained; a test case measures ghost hunting skills with a multiple choice quiz; and a back-of-the-book glossary defines terms of the trade. For “Ghost Hunters” fans, the book feels like Jason and Grant just slapped their names onto the project. Only the introductory pages to the fictional stories and ghosthunting guide are attributed to the guys from T.A.P.S. When they appear as characters, their actions ring false.

A weird romantic undertone is found in the lines: “Grant leaned forward. His dark eyes stared into Lyssa’s. Jason appears as if he is talking to a room full of kindergarten kids when he says, ‘Don’t be afraid to admit you’re scared, Lyssa. We all are sometimes.’” Meanwhile, Steve and Tango are replaced by an annoying set of twins. Chris Williams is M.I.A. instead the fictional team is led by female technical manager, Jen Shorewood. The producers of the book are more interested in creating formulated drama than depicting the reality behind the series.

Overall, Ghost Hunters Jason and Grant only have a supporting role in their own book.