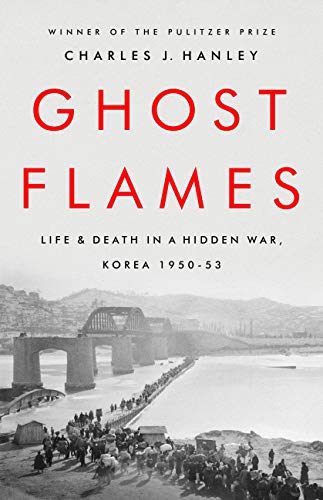 “Ghost Flames, within the framework of invasion, defeat, victory, and stalemate, tells the complexities of the post-World War II ‘ideological civil war’ of Korea.”

The Korean Conflict of the 1950s is known as the “forgotten war,” receiving only mention in passing in the nation’s history. But “it’s a war not truly ended, a war on hold” that affected so many of people and policies to the present.

This war’s unappreciated history is of ancient cultures, bombing, civil war, civilians, destiny ideology, murder, soldiers, and super powers. For Americans, it revives the memory of the remarkable General Matthew Ridgeway and of race in the first integrated American army since the Revolution.

Many Americans do not see it as a war. They do not know its dark secrets of how, for example, the South Korean government “summarily executed tens of thousands of political prisoners, potential northern collaborators, in the first weeks.”

North Korea did the same with its alleged enemies of the state. Many of the dead of all sides became “missing from years of war are never to be found.” They became “lost in a mountainous land, sun bleached skeletons.”

This story is of China as well as the two Koreas and the United States. The world stood at terrible risk. “It planted the seeds of a nuclear crisis” and threatened world war with the Soviet Union, “and remains the last armed conflict between great powers.”  “The threat of Armageddon remains,” however.

Ghost Flames, within the framework of invasion, defeat, victory, and stalemate, tells the complexities of the post-World War II “ideological civil war” of Korea. North Korea’s Communist Party grew to 9,000,000 by the war and became wildly popular with massive land distribution.

In the other Korea, “sporadic peasant uprisings” were “put down by police gunfire, sometimes with the help of U. S. occupation troops.” Guerrillas “carried on sputtering hit-run operations in the far south” “during which they murdered police and local officials.” Korea became the unheeded warning of America’s future conflicts.

Author Charles Hanley divides Ghost Flames into four parts, one for each of the years of the war from 1950 through 1953. Within these sections, the reader follows the war month by month through the eyes of a dizzying cast of individuals who lived through it until the truce, when “over barbed wire, American and Chinese troops exchange greetings, cigarettes, sweets.”

The book is a fast and engrossing haunting read that thoroughly educates while pulling on the heart strings. It blends military campaigns with real politic, while never losing sight of the people in the context of the immorality and savagery of war.

The book has maps, a chronology, illustrations, bibliography/notes on sources, and annotation.