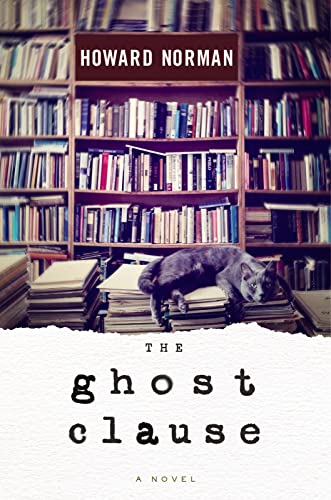 In this case, the learned eye belongs to Simon Inescourt, the ghost (and narrator) to which the title alludes, and, perhaps because of this, things take a while getting out of their academically high-brow head and into the story’s more emotional one.

This may or may not be a bad thing if you consider that the prose is charming, visually evocative, and skillfully written. The setting is cozy, romantic even. All in all, it’s an enjoyable ride. Just be prepared for over-intellectualized mental chatter about the concerns of people who think for a living, as in this scene in which Simon Inescourt’s spirit reflects on his own sense of what it means that he is “living” in his old house with a new couple and is, unbeknownst to them, able to spy on every moment of their lives:

“I fill these notebooks with all sorts of daily observations. Muriel and Zachary may discover them someday and know something of who they were or are, at least by my lights. That sentiment, of course, contains the presumptuousness of any chronicler of another's life. Naturally, I have no antecedent experiences or models for any of this, except possibly the novels of Junichiro Tanizaki, which I read during the last year of my life. There was The Key and Diary of a Mad Old Man, which are, you might say, imbued with voyeurism and other questionable behaviors, and yet often the unscrupulous and despairing intellects of their first-person narrators demonstrate a hard-earned pathos and, toward marriage itself, and abiding sense of astonishment and melancholy. And I confess to being surprised and definitely rapt with attention toward Muriel's expertise in Japanese writers bold in their erotic investigations. The heart is seldom rational—the mind, sometimes.”

Not this mind. This mind rationalizes everything. Then again, what else is the ghost of a writer to do other than think and ruminate, ruminate and think? And since there are two marriages being dissected here, multiply that by two (three, if you count a May-October lesbian couple searching for a country in which to marry, the subplot proving too convenient an excuse for some unfortunately obvious proselytizing).

His widow is Lorca Pell, a painter who sells their house just months after he dies of a heart attack and moves into the convenient apartment above her art studio, preserving only her right to keep his grave at the house and to visit him when she wants.

This is fitting because even though the novel is absolutely about these two marriages, it is also about the before and after of the home that houses these relationships even beyond death: the  traditional farmhouse of all our dreams, here serving as the fifth main character and, perhaps, its most expertly rendered:

“I had long thought that, in one way or another, almost every day Lorca and I spent in the house connected us to the past. The architecture itself; the columned chronicle of the heights of children formerly in residence, written in pencil alongside the pantry door; the decays and repairs; the vague smell of lightning that never leaves the nearest maple and drifts in through the library’s screened window on the breeze; moss on the roof shingles; secret passageways of mice; the morning, midday, and evening light striking each window differently; a century’s layers of white paint, maybe more than a century's; the branch that, after decades, finally reaches a length where a squirrel can acrobat onto the roof; wallpaper that peels away to reveal other wallpaper; the discarded rectangles of gravestones that some previous owner used to shore up and balance the back porch; the hieroglyphic porcupine tooth marks on the stanchions under the mudroom; how the bases of bedposts made barely detectable indentations in the planks, through generations of lovemaking and when the children hopped on beds like trampolines. Every nook and cranny archives time.”

There’s a missing child case creating tension between Zachary and Muriel, to say nothing of the havoc that slams the town’s sense of self and safety.

There’s the aforementioned subplot of a same sex relationship fighting against societal obstacles, and there are repeated allusions to the Vermont clause that allows buyers to return a house if they can prove it is haunted, something that never feels like a big enough deal to warrant the title.

There is also much about Simon and Lorca’s unsuccessful attempts to conceive, and the loss of a named and loved, but ultimately unborn, child.

And if you’re thinking all this sounds like a lot, know that it’s not. Norman does a good job of mixing it all in so that it reads like the flow of real people’s lives, and even though some things are glaringly pat; others obviously there only for the author’s pleasure and not the story’s; in the end, things do add up, somehow managing to wrap themselves into a fresh take on the intersection of love, life,  death, and marriage, and into the gift of an uplifting, surprisingly satisfying ending.